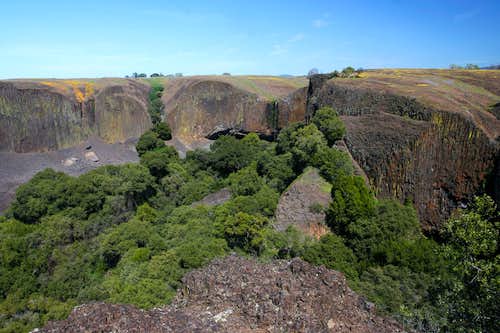 Known to few outside of the Chico-Oroville area of northern California, North Table Mountain does not offer a dramatic summit or craggy cliffs or other attractions usually associated with the “mountain” portion of its moniker. Instead, the flatness implied in its name is understandably the defining feature of the formation. However, what North Table Mountain lacks in montane attributes it more than makes up for in other treats for those willing to seek them out.

Located in the foothills of the northern Sierra Nevada, North Table Mountain is a remnant of an ancient lava flow that flowed out of the transitional region between the Sierra Nevada and the Cascade Range. Further evidence of these massive lava flows is found in the volcanic tablelands east of Chico and Red Bluff, especially the area encompassed in the Ishi Wilderness. The formation of North Table Mountain resembles the better known Upper and Lower Table Mountains north of Medford, Oregon. In both cases, lava flowed during an eruptive period and eventually cooled, only to be covered over by a newer flow. Eventually the eruptions came to an end and rivers flowed through the area. In Oregon, the Rogue River carved out the Table Rocks while North Table Mountains’ borders were created by the North Fork of the Feather River (now impounded as Lake Oroville). 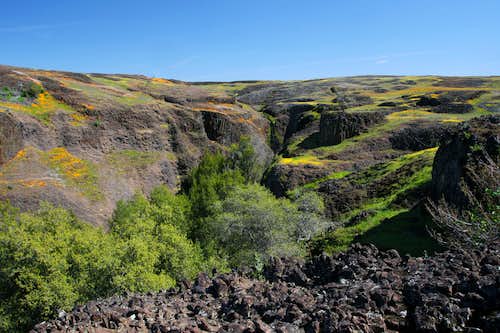 As previously noted, North Table Mountain lacks all the features that are typical draws to outdoors enthusiasts. Unfortunately, reaching the “summit” is not one of the attractions. The highpoint is located along the northeastern rim but it is on private property and should definitely not be attempted. Nonetheless, the mountain does have some truly outstanding qualities to recommend it. Despite being a truly flat formation, there are a series of impressive canyons cut into the western flank of North Table Mountain. The smallest and shortest of these is Flag Canyon. While boasting some impressive cliffs, like the highpoint, this too is on private property and should be avoided. While this is disappointing, there are still two more canyons further south. Beatson Hollow, the southern most canyon, has some excellent cliffs and a well shaded canyon bottom that has one of areas’ more attractive trails passing through it. An attractive waterfall cascades fifty feet into the canyon from the flat grasslands above.

North of Beatson Hollow is Coal Canyon, the true star of North Table Mountain. This canyon is a surprising sight when one first comes upon. The rolling tabletop of the mountain abruptly gives way to a spectacular canyon that is nearly 0.25 miles wide and over 300 feet deep. The upper portions of the cliffs ringing the canyon are composed of excellent displays of lichen dappled columnar basalt. Below the band of basalt is an unbelievable amount of talus. Huge chunks of the columnar formations lie perched on the rock piles, the gap left in by their fall clearly visible above. At the eastern extremity of the canyon, graceful Phantom Falls spills into the canyon. The sight of this waterfall, one of the prettiest in northern California is one of finest vistas in the Chico area. Numerous side canyons split off of the primary chasms. One large one in particular splits off of the south side of Coal Canyon. Its upper reaches are so narrow it resembles a slot canyon with a series of waterfalls pouring into it. 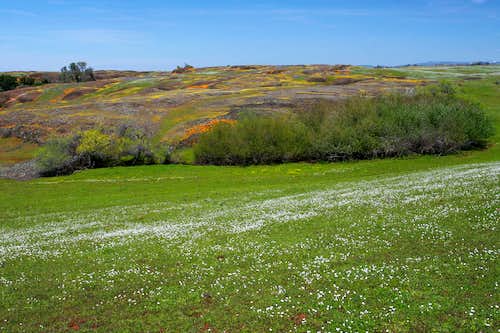 As awesome as Coal Canyon is, the true star of North Table Mountain is its spring wildflower displays. During winter, the broad grassy plateau is a dreary brown and attention is best lavished on the waterfalls, swollen by winter rains. However, come spring, the grass turns neon green and an incredible riot of flowers erupts in seemingly unending swaths of orange, purple, red, white and yellow. Dozens of varieties are represented. Of particular interest is the way flowers will grow in dense rings around the dark rocks protruding from the grass. 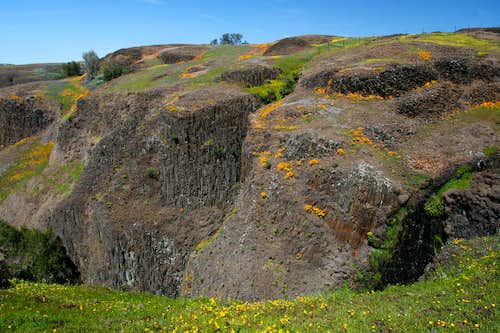 A small canyon and waterfall on North Table Mountain

Since the highpoint of North Table Mountain is on private property, visitation to the volcanic mesa is generally focused on visiting the waterfalls and exploring the canyons. Reaching Beatson Hollow is the easily accomplished by following a broad use-trail west from the parking area. The route passes by a pretty waterfall and then descends into the canyon. From here the path heads through the canyon to the escarpment on the western edge of the mountain. Coal Canyon is reached by hiking northwest from the parking area, passing through two shallow drainages. A third drainage leads to a side canyon stemming from Coal Canyon. Cross the waterfall at the head of the canyon and travel towards the end of the fence. The fence ends above a narrow fissure. Skirt around the fence and round the drainage that leads northeast, continuing to the northwest. This will eventually deposit one on the southern rim of Coal Canyon, with Phantom Falls visible to the northeast. The fence one must pass by marks the boundary of the public land and travel beyond is prohibited. 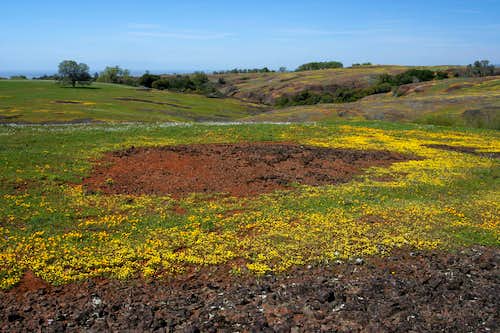 From Chico, drive south on Highway 99 to the intersection with Highway 70. Travel east on Highway 70 for a little over 6.5 miles. Turn right on Cherokee Road. Pass through the little village and continue southeast for 5.5 miles. The road will pass through oak savannah for several miles before suddenly climbing up to the top of the plateau that is North Table Mountain. When it does, look for the parking area on the right.

From the Sacramento, head north on Highway 70. At Oroville, exit onto Grand Avenue and drive east. Turn left on Table Mountain Boulevard and then quickly turn right onto Cherokee Road. Travel several miles before the road climbs up to the top of North Table Mountain. Look for the parking area on the left. 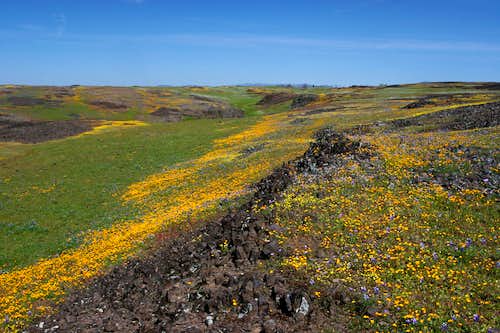 Over 3,000 acres of North Table Mountain are contained within North Table Mountain Ecological Reserve, a body of public land owned by the state of California and administered by the State Parks system. The extent of the “administration” seems to be the maintenance of a parking area and the presence of some portapotties.

The preserve is surrounded by private property. Please respect the landowners and stay on public land.

Be aware that cows may be grazing within the ecological reserve. 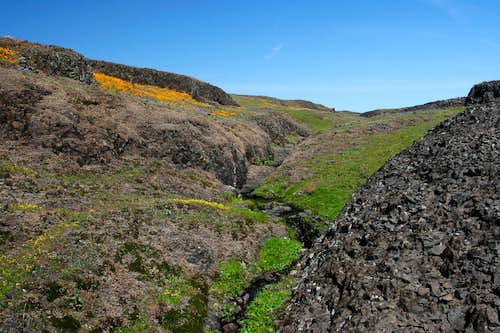