I’ve been eyeing Chair Peak ever since I took avy level 1 and our stand-in guide, Seth Waterfall, told us about soloing its north face, last weekend I finally got the chance. After giving serious consideration to a couple technical routes on Hood both us were, in the end, too scared to try, Ryan and I settled on the Northeast Buttress of Chair and figured it would be a fairly moderate day. We were right and we were wrong.

Special note: as should be pretty obvious, as they are good and I am in most of them, these are mostly Ryan’s photos.

It was just getting light when we left the Alpental parking-lot, eager to get ahead of the two other groups we saw going for the same objective after hearing about the lines that formed several weeks ago. The route into Source Lake was, as usual, a well packed skin trail, and we amused ourselves by not even putting on our snowshoes until the lake and imagining the scathing looks the backcountry skiers would give us if they had seen us. 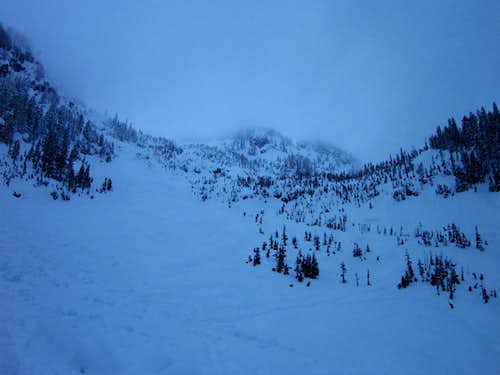 Looking up from Source Lake
It was my impression was that the route simply headed up the ridge from the pass above Snow Lake, which, as I pointed out to Ryan as we traversed down and over to the bowl below the east face, made it a route-researching error, not a route-finding error. This put the two other groups ahead of us, although we ended up heading up the snow slope to the beginning of the route behind only a group of two that ended up doing a different variation on the NE Buttress, the other group of four was headed for the North Face.

At the base of the first pitch of the Northeast Buttress visibility was very low, a stiff wind was blowing from the north, spindrift was billowing down the route, so we tried not the think about it headed right up. Ryan and I had agreed that I would take the 1st and 3rd alpine ice pitches and he would get the waterfall step, which meant I had the first lead, something of a rarity for us.
The first half of the pitch consisted of steep snow abutting mostly unprotectable rock, I say mostly because if I persisted I could, finally, find a couple piton cracks. I managed to clip one fixed piton and place two knifeblades before the crux, a mixed step that involving trusting an layer of ice over rock about an inch thick for a foot placement, ice that I had mostly removed without about one thwack of my adze a couple minutes earlier looking for a protectable crack. It was scary - I didn’t know if I’d be able to find pick placements above it. I’m recounting it in detail because it was probably the hairiest lead I’ve done yet and I’m probably more proud of it than I should be. From there I ran out about 50 feet of rotten alpine ice to the tree anchor.The slope to the waterfall was basically just snow, so we ran together the 2 pitches using some simulclimbing. I think Ryan threw a sling around a tree at one point, and that was the only protection. The waterfall itself was a little anti-climactic - 10 feet tall at the most and a little slushy and rotten, the trick was finding a way to top out because there weren’t any good sticks more than 6 inches from the top of the thing. At the top of that pitch Ryan dug out his dead-man picket anchor and we coiled the rope for the final trudge up to the summit, which was shorter than both of us were expecting.

We had talked with the group just below us, who had arrived at the bottom of the waterfall pitch just as Ryan was leading up, and had agreed to pair our ropes for an easier rappel down. After hanging out for about 20 minutes we got impatient and headed down the obvious couloir, but not finding an anchor of any type we climbed back up to the summit, a distance of less than 100 feet. After scouting around a bit we decided that instead of being wusses we should just go for it, the couloir had to be the way down and we were probably just above the anchor when we turned around. So we again descending the couloir, this time continuing as it steepened to above 45 degrees, past an old sling, a fixed nut, and into a large gully which looked like it went all the way down the east face. We descended that gully until it ended in a sizable cliff and we were bright enough to get out the compass, at which point we realized that not only was this route not going to go, but we were descending the wrong aspect entirely. After a bit of cursing, and by a bit I mean a lot (I really hate turning around on descent), we re-climbed most of the west face and met up with the guys doing the other variation. It turned out we were basically one couloir over from the one that led right to the anchors, and from there it was a simple rap down and hike out.

It was a day for firsts, first winter alpine ice climb, first mixed pitch I’ve lead, and first piton I’ve placed, and although I was frustrated at the time, I never reached the unset of true and utter terror that comes with honestly wondering if you are going to get out alive. What I felt was a sinking disappointment and anger that things couldn’t just go right. It seems like this happens more often then not: just when I think I’ve made it, just when I let down my guard, everything goes to hell. It happened on Rainier, it happened on Mastiff-Howard, it happened on Black Orpheus, it’s happened on others for more embarrassing reasons that I care to admit. My only conclusion is that these two occurrences are not unrelated: bad things happen not after I’ve let down my guard because God hates me and is trying to kill me (which he does and is), but as a direct result of letting down my guard. Something switches off when I think I’ve made it and I stop paying as much attention as I should, I think I’m done, so I act like it, and the transition from thinking that you are done to realizing that you are not is one of the most difficult things to face in climbing, or in anything for that matter.

This is a route I've been wanting to do, though it's a long way from me. There's the potential for significant avy hazard on the approach, right?

Yes, when avalanche danger is bad the slopes up from source lake are a death trap. numerous people have died up there.