I have not climbed this route and make no claim to having done so. I only acquired ownership of this (route) page because it seemed the original author, Mtn Ear, was no longer active on Summitpost. Fortunately, he's back!

Additionally, I have attached both computer-generated Topo Map and Profile for this route from Baker Lake Trailhead to the summit of Trapper Peak, plus included some computer-approximated statistics.

The Northeast Couloir Route can be accessed most easily from either of two trailheads, the Baker Lake Trailhead and the Trapper Creek Trailhead. The approach from Baker Lake is used more often because an approach from Trapper Creek entails a substantial increase in both the amount of elevation gain, and off trail hiking required to reach the base of the peak. 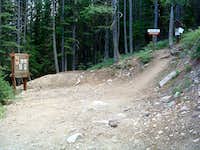 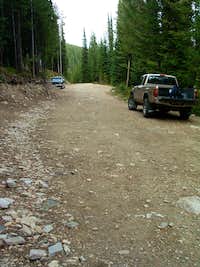 Parking for the Baker Lake Trailhead.

At 1.1 miles after leaving the West Fork Road, a road cuts off to your left (southwest). You want to continue straight ahead, just as the sign indicates.

Another mile along the road, at 2.1 miles, you turn right onto FS 5634 and the trailhead for Baker Lake. This intersection is signed. Follow it to the end, which is 10.1 miles from your turnoff from the West Fork Road.

There is parking space for several cars, but it's a tight spot for turning around.

The trail begins going immediately uphill at the end of the road. 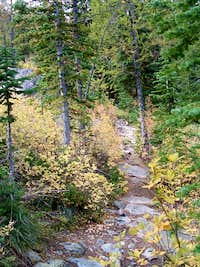 Beginning immediately at the trailhead, you enter a steep section of the approach trail, when your legs are nice and fresh. Fortunately, the steepness only lasts about 15 minutes, which is about how long it takes to reach Baker Point, an interesting rock outcropping above a field of talus. 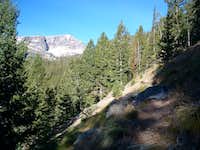 The first glimpse of East Trapper before reaching Baker Lake.

Shortly after leaving Baker Point, the trail begins to level off enough to let your legs recover from your early elevation gain. As the route begins a traverse along the north side of one of Trapper Peak's long ridges, you get your first glimpse of the top portion of East Trapper Peak. (Just as a point on interest - there are no known routes up its massive North Face.)

As the trail nears Baker Lake, some nice outcroppings of granite boulders sit uphill and to the right (north) of the trail. Every time I see them I think they would be appealing to those who like bouldering or want to practice climbing techniques on rocks that are comparatively accessible. 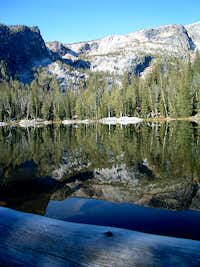 Just before reaching Baker Lake, the trail splits. The left (and most obvious) fork goes almost directly south as it bypasses the lake, through a boggy area, and connects to the Baker Lake Ridge Route to Trapper Peak. Keep a sharp watch for a couple of cairns marking the right (west) fork up and over some slabs. The right (west) fork is what you want to follow to reach the lake.

If you've been keeping a good hiking pace, less than 45 minutes after leaving your parked vehicle, you should reach the eastern shore of Baker Lake, about 1.25 miles from the trailhead.

Though a trail completely encircles the lake, the best way around is on Baker Lake's north side (your right). Follow this trail around until just before it reaches the creek flowing from the higher lakes, then turn right (southwest) onto the path leading away from the lake. 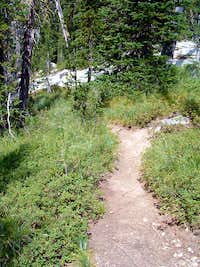 A portion of the trail between Baker and Middle Lakes.

The track stays on the north side of the creek as it goes uphill toward Middle Lake, close to .75 mile from Baker Lake's eastern shore. In the past, this section of trail has been spotty and difficult to follow. But over the past few years, as more and more people have made the hike to Gem Lake, the trail has gotten enough use to make its track more obvious than before. Now days, you're less likely to lose it.

As you pass Middle Lake, the trail stays on the north side of the inlet creek flowing from Gem Lake. In less than .25 mile you will reach the northeast corner of Gem Lake, a beautiful little tarn 2.25 miles from the trailhead. 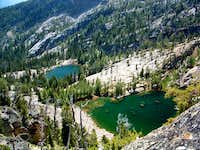 Middle and Gem Lakes from the col above Gem Lake.

At an elevation of 8,340', Gem Lake has several good camping sites which can be used as overnight resting spots before tackling one of the climbers' routes to the nearby summits. Bring your fishing rod, all 3 lakes hold cutthroat trout!

Begin the off-trail section of this approach by traversing around the north side of Gem Lake on talus toward the bottom of a not-so-obvious gully (more a slight depression than a deep gully) leading up to the obvious col (saddle) about 290' above the lake. Pick your own track to ascend. As you climb do your best to avoid the trees, brush, and scree along the way. There is no “perfect” route up, but careful route finding will allow you to conserve some energy and climb over less deadfall. 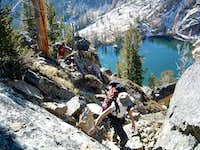 Climbing from Gem Laketo the col.

From the col, at about 8,630', descend the very loose rock and scree in the steep and obvious couloir (gully) down into the bowl surounded by Trapper Peak, North Trapper, and East Trapper. There is a lot of loose stuff in this couloir, so it makes sense to don a helmet before beginning your descent. Continue to the bottom of the couloir, at an elevation 8,000'. 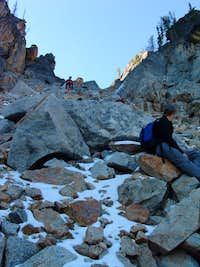 Descending the col into the basin.

Traversed over talus and large granite blocks in a northwesterly direction below a cliff band and along a small stream, then turn almost directly west and continue climbing toward the base of Trapper through a mixture of brush, whitebark pine, larch, and huge scattered boulders into the upper levels of the cirque.

It is at this point that the two approach routes meet and the climbers' route begins (the other approach being from Trapper Creek Trailhead).

Continue moving southwest through the basin toward the upper levels of the cirque and the base of Trapper's northeast face. The shortest line lies to the left (southwest) and close to the base of East Trapper; however to avoid falling rock and snow (plus the steepness of the line), it is better to stay farther out (northwest) and keep your line of travel closer to the middle of the basin. 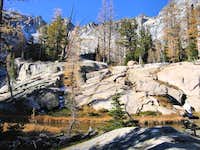 Once you reach the base of Trapper's northeast face, according to Mtn Ear it is simply a matter of climbing up the couloir to the summit. This is about a 1000' climb which Mtn Ear claimed is steep, and in places, between a 60 and 65 degree incline.

However, Tim Sharp has informed me there is a very large boulder in this couloir, about 2/3 of the way up. If you fully expand the "Highlighted route up Trapper`s Northeast Couloir" photo, the boulder becomes very apparent. A few who have climbed this route told him the area around the boulder is the steepest section of the climb with a short step of approximately 50 to 55 degrees (a little less than that claimed by Mtn Ear). If any other portion is steeper, they claimed it would only be at the summit cornice. They also reported the incline in most of the couloir is generally between 40 and 45 degrees. 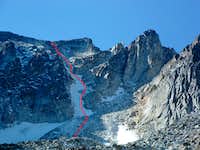 Tim relayed that this couloir is predominantly used by skiers, who often approach from the Trapper Peak Trailhead via the standard route. After reaching the summit, they ski down the couloir then boot-kick back up.

He further stated that there are two other couloirs that top out in the col between East Trapper and Trapper Peak, and that those are steeper, with the eastern-most couloir going out at over 60 degrees for its entire length. The two crazy dudes who informed Tim they had skied that couloir, said it was heinous!

Mtn Ear pointed out that the couloir is essentially a large avalanche chute, so associated dangers should be carefully evaluated before attempting a climb.Also, take care if climbing close to the cliffs bordering the couloir. Mtn Ear claimed to have nearly stepped in a moat between the snow and cliff which he said must have been 15' deep. 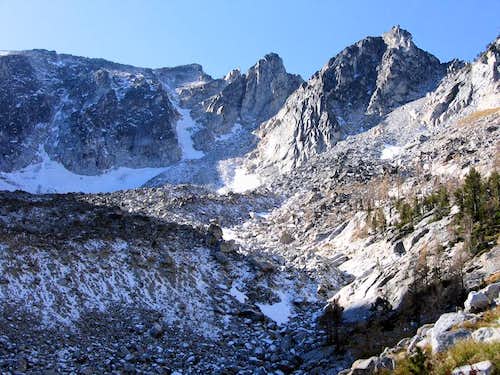 The Northeast Couloir and the snout of the rock glacier which lies below.Photo by Vernon, 14oct06.

Instead of descending this same route, Mtn Ear followed the Trapper Peak Standard Trail to a point southeast of East Trapper (46.88731 N, 114.28112 W), then descended a couloir (in a northerly direction) to the west side of Gem Lake and rejoined their ascent route. This allowed his party to avoid having to climb the couloir which they had glissaded from the col above Gem Lake's north shore.

It is also possible to use the Baker Lake Ridge Route to return from Trapper's summit to Baker Lake. If there is a good snow cover on the terrain, this route can be skied from near the Trapper summit to the top of the gully which drops down just south of Baker Lake. (A good telemark skier should be able to ski down the gully, and beyond.) 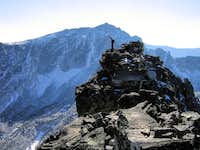 The view of Trapper's Northeast Couloir from the North Trapper summit.Photo by Vernon, 14oct06.

If the snow is hard and consolidated, crampons will be needed. A rope and ice screws could also come in handy under those conditions. (When Mtn Ear climbed, the snow was fairly soft, so they simply kick-stepped all the way up.)

Mtn Ear's party used snowshoes for the approach and then again as they descended the ridge off the summit.

An ice axe is a must – the snow never melts completely out of the ascent couloir.

A helmet is highly recommended because of the loose rock and scree in the couloirs.

Technically this route is viable at any time of year. However, Mtn Ear believes this is really only a great late-spring or early-summer snow climb. This avoids the higher avalanche danger of winter and the open scree of late summer.

If you intend to climb this route during the winter, keep in mind that once it reaches Gem Lake, this route passes through several areas which are susceptible to avalanche. Continuously assess snow conditions and carry a transceiver, shovel, and probe pole, plus know how to use them.

Additionally, any serious snow on the access roads will increase the length of the approach by several miles.