This is a strenuous hike, but it rewards you with a visit to Sandbeach Lake and fantastic views of south sides of Longs Peak, Mount Meeker, and Pagoda. Begin at the Copeland Lake Trailhead. To get there, drive a little over two miles north from Allens Park on Peak-to-Peak Highway. Make a left at the well-signed turnoff for the Wild Basin area of Rocky Mountain National Park. The trailhead is just to the right of the entrance station, and there's a large wooden sign there that reads "Sandbeach Lake Trail."

Hike 4 miles on the trail to the unique Sandbeach Lake. Key landmarks along the way include a junction with the Meeker Park Trail at 1.2 miles and the crossing of Hunter Creek (there's a nice footbridge) at 3.0 miles.

NOTE: An alternate route exists that

From Sandbeach Lake, the real fun begins, and I can almost guarantee you'll find complete solitude. I highly recommend a map and compass, because you'll be bushwhacking for about two miles to reach the basin surrounded by Pagoda, Longs, and Meeker. Bushwhack north from the lake. Initially, the bushwhacking isn't so fun. Be prepared for some large boulders and a lot of deadfall (but maybe you'll pick a better route than we did!). You'll crest a very minor ridge leading from Mount Orton, and at this point you'll want to point more to the northwest because your next major landmark is the unnamed lake at 11,200'. As you get nearer Hunters Creek, the bushwhacking gets a lot easier with a lot of open space between the trees for much of the way. Once you come across Hunters Creek, which drains the lake you're headed to, it will aid in your orienteering. From the lake, be sure not to head northwest because this will take you to Keplinger Lake, and you'll be in the basin west of Pagoda instead of the correct one that's east of Pagoda. 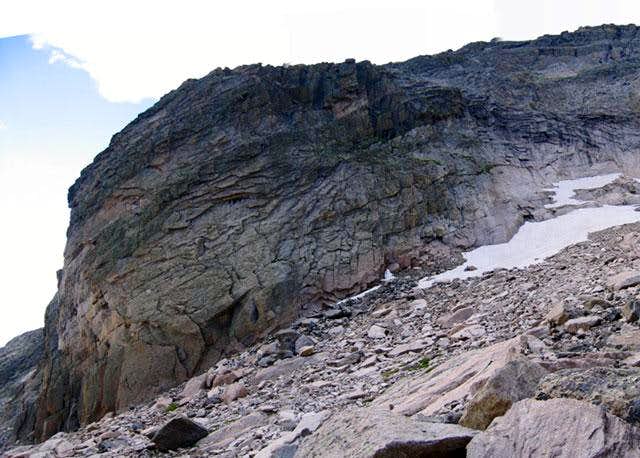 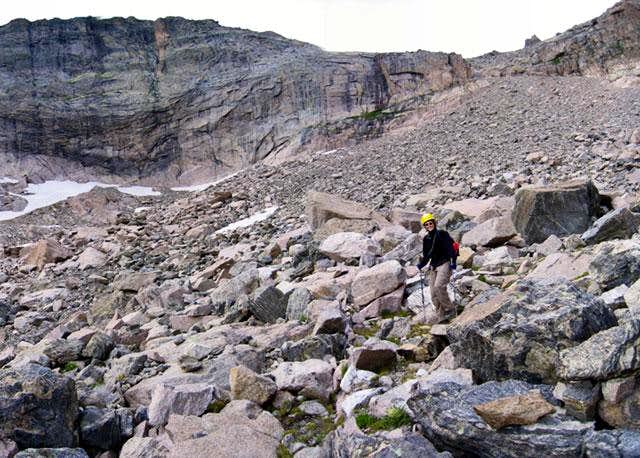 Continue the bushwhack northeast. The area becomes choked with willows beyond the lake, and you may wish to retreat to higher ground east of here to avoid them. Start heading in a more northerly direction and take in the views of Meeker, Longs, and Pagoda's impressive south ridge. This is a magical basin. At 12,000' once you're past a rounded buttress, you'll turn northwest, and the route to the Pagoda/Longs saddle becomes obvious. Climb loose talus and scree for 1000' up a gully – the only cut through an otherwise continuous cliff band – to the saddle which lies at 13,100'. From the description Kane provides in his Northeast Face route, this climb sounds as nasty as climbing the scree from Glacier Gorge to the same saddle. Turn left and climb 400' to Pagoda's summit, where the view of Longs will knock your socks off!

With a car shuttle waiting for you at Bear Lake or the Longs Peak Trailhead, you can turn this hike into a major cross-country affair. Use your imagination, and have fun!

Bring a map and compass! As a spring season climb, this route would require a high camp for all but the most god-like among us. I know nothing of when the conditions in the area would be best for a snow climb, but it could make the 1000' ascent to the Longs/Pagoda saddle less aggravating.