The first recorded climb of the Notch Couloir came in 1871 by the Rev. Elkanah J. Lamb in which he reversed the route from the summit (Staircase-Notch Couloir-Broadway-Lambs Slide). In the subsequent 50 years from Lamb’s climb, his feat was only repeated once and that was by his nephew, Enos Mills (1903).

The first recorded climb up Lambs Slide was registered in 1922 by none other than Prof. J.W. Alexander of Princeton University. Although half-way up Lambs Slide, he used a previously unclimbed wet chimney to access Broadway; a climb that he repeated only two days later with famed ranger, Jack Moomaw up the Diamond proper. That chimney now bears his name, Alexander’s Chimney. Some people use this as an ice alternative to Broadway before continuing up the Notch Couloir.

The Notch Couloir is the famous couloir that extends up Longs Peaks’ eastern face. This is a serious snow, alpine climb. Most parties choose to rope up for the climb. Since the entrance of this couloir starts half way up the eastern face, any fall or slip inside the couloir without proper self-arrest technique, will send the hapless climber down and over the edge of the lower Diamond…some 600’ down to the scree below.
Various conditions can be expected while climbing this route due to its recessed nature. Conditions such as: fluff snow, hardened névé, ice, rock and mixed can be expected. However, late spring and early summer usually makes for the best climbing conditions, pending the previous winters’ snowpack of course. The top of the notch has a tendency to cornice from the winds rocketing through the notch. This route slides frequently from small pieces of the cornice breaking away and sliding various distances due to snow conditions.

The average pitch of the couloir ranges between 35-38 degrees. Just past half-way is the first of two technical cruxes. A short 40’ ice/rock headwall must be negotiated. Getting out of this ‘bulge’ can be awkward. The actual crux of the couloir doesn’t come until one is out of the couloir and traversing north on 5.4 rock into a hidden chimney commonly referred to as the Staircase. The rock is slabby but there are some good horizontal cracks that take pro until the chimney is reached. During heavy snow years, the first crux resembles more of a very steep snow climb with good purchase underneath. The Notch Couloir is roughly 1,000’ in length and is highly regarded as one of the premier alpine routes on Longs Peak. 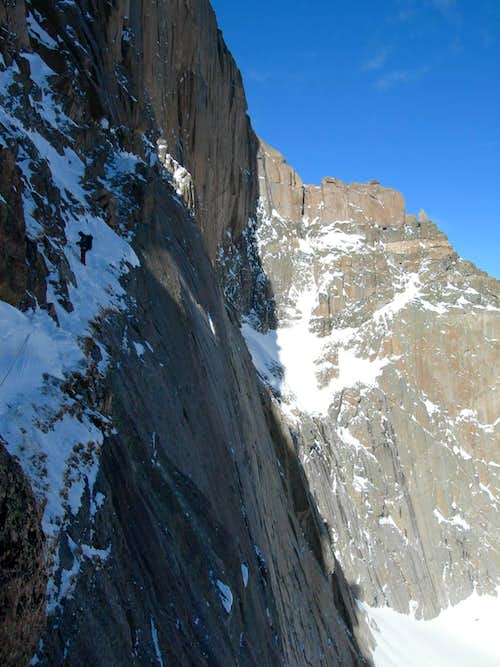 Traversing Broadway
The approach to Notch Couloir leads you into one of the best and most scenic alpine spots along the entire Front Range…Longs Peak Cirque. Leave the Longs Peak trailhead and follow the well-word path to Chasm Junction about 3.5 miles. At the fork, there is a horse/llama tie and small outhouse. Take the left hand trail and continue traversing gently downslope across Lady Washington’s Southeast face.

At Chasm Meadows, a modestly-sized grassy meadow with another outhouse and sign, turn your attentions due west towards the small cliff. Follow the climber’s path up this steep embankment to Chasm Lake. The views of the Diamond from here are absolutely breathtaking! Martha’s Couloir (usually ice and mixed climbing) is north in the deeply etched gully on Lady Washington’s South face. The Flying Dutchman Couloir is to the south only partially seen as it doglegs out of view.

Contour to the right around the north side of Chasm Lake. There path is a social trail of no defined route due to the rock hopping. Just aim for the lower apron of Lambs Slide which will usually be visible most of the year. There are occasional cairns...follow them. The general path leads past some great alpine bivy sites for future climbs. Take note. Keep scrambling around to the west side of the lake and up a gentle slope to the start of the infamous Lamb’s Slide.

Whether it’s winter, summer, fall or spring, this hidden slope requires crampon use and axe. Come winter and spring, it makes for a great snow climb of moderate pitch as the inclination remains fairly consistent. It is possible to climb Lambs Slide all the way to The Loft if that routes approach is questionable. Come summer and fall, expect hardened névé or ice. The inclination of Lambs Slide averages around 44°-46°. Make sure your self-arrest technique is down pat. Because any slip or fall here may result in broken bones. Any slip or fall in the Notch Couloir will result in a loss of life as you free-fall down the lower half of the Diamond.

Climb up the slightly increasingly pitch of the couloir to a prominent ledge located climbers right. Contour your way across to the start of this wide ledge and have a break. There's a good flat, safe spot to sit and relax. Depending on the season, a rope is mandated and warranted for this climb due to the consequences of a fall. Most people choose to rope up here. This is Broadway and the start of your climb. 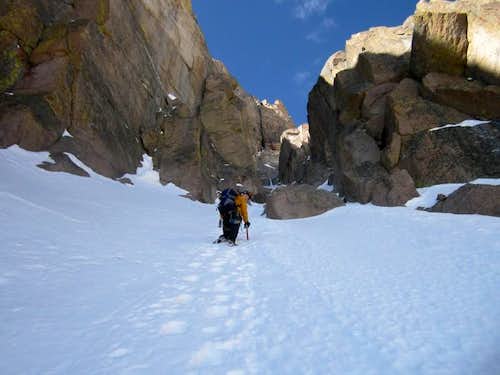 The Lower Couloir
Leave Lambs Slide traversing along Broadway. Broadway is the prominent ledge that cuts the Diamond in half. It varies in width from only a few feet across to perhaps as much as twenty feet. There is a gap about a quarter of the way where Alexander’s Chimney exits. This gap can be simply stepped across while hugging the boulder (it’s very airy at this spot!) or if snow is present, it can be completely avoided by contouring up andover it.

Keep following Broadway up and traversing further across the eastface. There are a few sections that you will definitely feel the exposure ‘neath your feet.
The Notch Couloir will quickly come into view but until one is about40 feet from it. There is a good, small table-sized rock here in which to ropeup. Some rangers have colloquially called this, ‘Raven’s Roost.’ If you haven’t already (if snow is present on Broadway), strap your crampons on and break out the axe. You can either head straight up the gully or do some easy mixed climbing on the northern (right) edge. Eventually, the right side will depart for The Kieners (Mountaineers) Route. Continue straight up the center of the couloir or where the snow feels best. The pitch at the bottom of the couloir is about 33°-34°.

A few hundred feet up, there will be agood rock in which to have a rest from fear of sliding located on the right side. Look for a flat breadth akin to the rock wall. Do some digging and have aquick sit. The width of the couloir retains a pretty wide span. The pitch will gradually increase but overall, it remains fairly consistent.

Roughly 550’ up the center the couloir, the first crux will be encountered…a rocky bulge that often forms alpine ice. This can be avoided far climbers right up a very steep bypass but with little protection. Climb up to the bulge’s left side up the alpine ice (perhaps AI2-3). Protection is easier to come by using this alternative via short screws (10, 13 cm) or small rock pro on the boulder climbers’ right. Getting over the lip (shallow alcove) will be a bit exhilarating and actually kind of fun. The slope continues past this constriction at about 37°-38° but dog-legs to the right.

The slope will broaden out considerably past the constriction and the top can be seen from here. Looking back (turn around), Chasm Lake is breath taking from here as it seems the slope just drops out of sight to nothingness. Keep climbing upwards slightly veeringto the right. The pitch is steeper to the left of this last push. Climb towards the small but moderate rocky cliff straight-ahead and then abruptly turn left back into the couloir for the final push to the notch proper. The slope lowers to about 33° here. The Notch is ample enough to unstrap thepoints, relax and put away the axe.

From the Notch, one can either repel down the west side, some good rock for anchors/slings and join up with the Loft Route or continue onto ‘The Staircase’, the 5.4 rock portion which grants passage to Longs’ summit. Have someone belay on the nice, ever so-tilted scree ledge while the leader traverses using a nice horizontally-running finger andpalm crack. The granite is slab by the way. Enter the chimney (usually wet) utilizing small to medium pro. Holds are adequate but seem harder then 5.4. Reach the top of a boulder, dig in and bring up the rest of your party. The difficulty drops to hard 4th class and eventually even that drops to 3rd class. The summit is yours!

Mountaineering boots are an absolute must for this route. Other necessities include: a general mountaineering axe, crampons and helmet. Optional equipment being a standard 60m rope, small alpine rack with stubby screws and small rock pro no larger than 1.0. Having a few chocks along wouldn’t be a bad idea.
Bring extra slings and maybe a picket to set an anchor at the top of the constriction (mixed pitch) if conditions are poor. Standard alpine clothing.

Andy in the Rockies