"Nothing but the best!" - Turret Ridge

"Nothing but the best!"


Very few peaks carry with them a reputation as large as "Colorado's hardest 12er", Turret Ridge. Information on this notorious peak is scarce at best, and the few recorded climbs describe rotten rock, crumbling walls and a general lack of safe climbing. Turret Ridge was a highly coveted climb and the "first" ascent was completed in 1991 by Colorado peak-bagging legend Mike Garratt, George Fuller and Terry Root. The party worked it's way up the sheer walls onto the exposed summit and were shocked to find a small register containing the names of 3 members of the Iowa Mountaineers who had been the actual first ascent party in 1979.* Obviously this type of objective does not attract many climbers, and to this day Turret Ridge sees only a handful of ascents from Colorado's most involved peak-baggers, especially those intent on scaling all of the 12ers.

My relationship with Turret Ridge began several years ago when some of my climbing partners brought it to my attention as something we should check out. I have to admit that my weakness is seldom-climbed peaks, but my general lack of climbing ability kept 5.9 garbage rock out of my sights and eventually out of my mind. That was until last year, when I began communicating with longtime desert hard man and adventure climbing connoisseur, Dave. Not only was Dave gung-ho to climb Turret Ridge, but when I expressed a concern about safety with my first child on the way, he happily volunteered to lead everything. Obviously my wife was very happy to hear this and the plan was set. After battling dates and weather, we finally settled on a time, and before I knew it I was making the eternal and lonely drive down to the Cimarron Range.

I have to admit that the drive seemed longer than usual, especially since I had been down in the area just the week before. A sense of relief came as I turned up onto the nice dirt road up toward Owl Creek Pass, and I motored upward without seeing any other traffic. As I drove around Silver Jack Reservoir, the abrupt view of Turret Ridge's jagged flanks caused me to come to a sliding stop. The view was so striking that I stood outside the car and took it all in before wanting to complete the drive. Eventually I moved on and soon met Dave up on the pass and followed him down the road to a nice camping spot immediately between the impressive Chimney Rock and Turret Ridge's summit tower. We spent the night chatting about the upcoming climb, sorting gear and getting devoured by bloodthirsty mosquitoes. 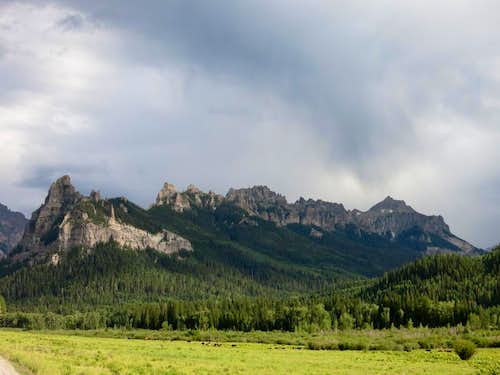 The morning came slowly after a night spent tossing and turning in the back of my car, and before I knew it we were grinding up the steep slopes. Thankfully the deadfall was much better than I had expected, but I couldn't help thinking about how many times I was going to fall down coming back down the steeply vegetated hillside. We gained some company after Dave's dog Wilbur had escaped his officially titled "backpacking dog nanny" and sprinted up the slopes to join us. Our arrival at the Dusinane/Turret Ridge saddle was joyous as we hit the best animal trail I have ever experienced. The literal highway was better than many constructed trails I had been on and it carried us straight to the dramatic cliffs of Turret Ridge. As we contoured around to reach the start of the climb, I craned my neck upward to marvel at the cobbled face above and couldn't help wondering what was holding it all together. "Nothing but the best!" Dave chimed in and we soon sat at the base of the route.

The steep gully reminded my sharply of my experience on Ship Rock. We donned harnesses, gear, and shoes, and Dave carefully tied Wilbur up in a safe alcove to shelter him from the inevitable rock fall we would send cascading downward. Initially the climbing went smoothly and we cautiously scrambled upward, carefully testing every hold protruding from the gully. Overall the rock seemed better than we had expected, but different layers had differing attitude about how much they would let you pull on them. The easy scramble gave way to steeper slopes, and we belayed a pitch up to the base of the obvious chimney that marked the beginning of the real climbing. Dave started up the chimney and had to battle a healthy crop of brushy growth in the lower section of the pitch. The climbing soon reared up and it became obvious that trusting the rock was the name of the game. A large chockstone blocked access, and Dave stemmed cautiously around it and disappeared out of sight. I slowly payed out the rope as I watched some questionable clouds blowing immediately overhead and couldn't help but wonder what the sky looked everywhere else. Before long I heard the familiar "off belay" come echoing down and I quickly started climbing. Immediately I was impressed with Dave's lead as the climbing was dirty and harder than expected. Cleaning gear in the back of the dark chimney was taxing with a pack on, and I'm sure Dave wondered what was happening with my continual grumbling. Eventually I reached the belay and moved higher up onto a ledge to be closer to the base of the next pitch which was supposedly the crux of the climb. 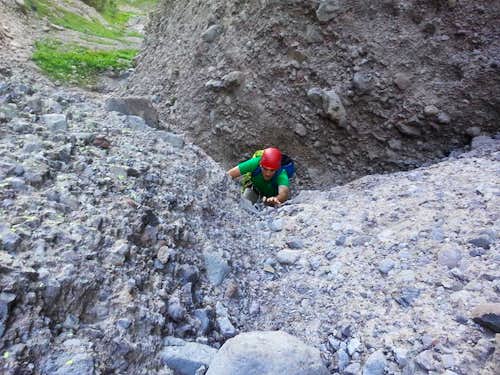 Once again, Dave set off across the inertial traversing and unprotected face to reach the crack above. The weather seemed stable, but large clouds periodically blew just into sight over the summit before disappearing again. I heard a laugh from above and glanced up to see Dave laughingly holding up a large rock and exclaiming, "My handhold!" I smiled and informed him to "Be careful, you're having too much fun!" The crux came as a short overhanging section blocking access to the upper crack, and I couldn't help but be worried as it appeared much steeper with a climber than it looked before. After a momentary nesting of gear, Dave made quick work of the moves and cruised up to the belay before I knew it. The climbing initially went smoothly and I paused nervously under the large overhang. I was starting to get used to the rock, but making powerful moves on these cobbles still was sitting on my mind. Thankfully, Dave gave me a tight belay and I soon joined him up on a wonderfully exposed ledge just below the summit. These were the first views we had of the surrounding terrain, and the broken mass of Turret Ridge's northern slopes was incredible. My attention was pulled back as I noticed that not only was the next pitch much more of a traverse than I had expected, but it was also covered in the thickest lichen crop I have ever seen in person. A slight knot crept into my stomach as Dave carefully launched across the steep wall and I watched the occasional rock fall into the void below him. It was surprising that not only was there zero elevation gain on the pitch, but he was a few feet lower than me as he disappeared around the corner and exclaimed "off belay". As the rope came in, I focused on my breathing and stepped down onto the first cobble. I was very thankful that Dave had protected the traverse every few feet, but I knew that many of the placements were just about as good as they looked. Halfway across, as I was knocking some loose holds off with my foot, my seemingly solid hand snapped sharply out of the wall and hit me in the face as I shifted my weight to not fall into the open air. A few choice words came freely out as I held on and then continued smoothly the rest of the way to the belay. The summit was finally in sight and it was glorious knowing we were practically there. 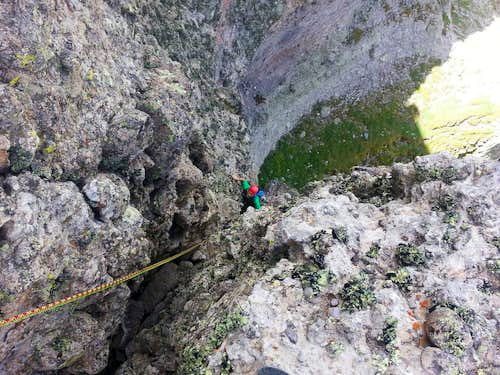 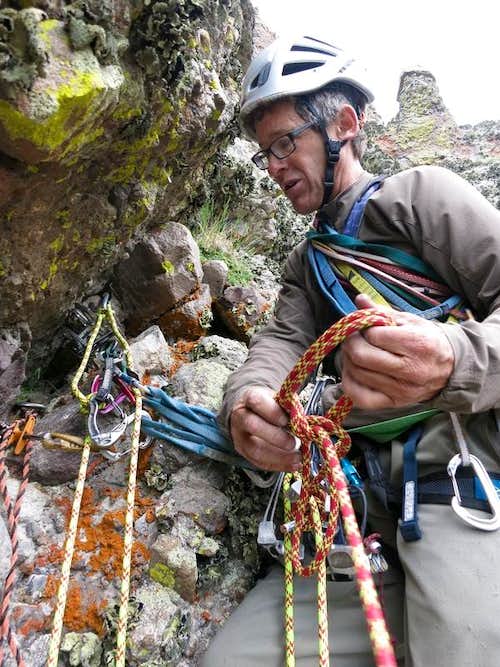 Lead master Dave
We quickly shifted everything around, and as Dave moved up I noticed a few drops of rain beginning to fall. My eyes scanned the sky and I couldn't help but imagining the thick lichen becoming a slippery death trap. Fortunately, it stopped as quickly as it began and Dave called off belay from the summit. As I continued up the final lichen-encrusted moves toward the top, my motivation was increased by a sudden peal of thunder. I scampered as quickly as I could to join Dave at the sudden summit, and was happy to see the sky looked decent and the storm appeared to be off over the Courthouse for the time being. The summit was wonderfully exposed, and the dramatic views were among the best I have seen. The summit register looked good from the outside, but I poured water out of it and didn't even attempt to extract the soggy mess from the inside. Snapping a few photos was all the time we took, and a few more rolls of thunder moved us along. Dave belayed me down to a large pillar covered in old rappel slings, and I brought him over to inspect the anchor. We both decided it appeared reasonably trustworthy for an ancient anchor. Dave cruised out of sight and I tried not to focus on the thunder that kept occasionally breaking the silence. I soon followed and carefully maneuvered as to not send missiles down immediately onto my partner below. The next rappels went smoothly and the weather seemed to relax the lower we got. Rockfall was an issue, but thankfully we didn't have any major problems. After the final rappel, we pulled the ropes and scrambled down to where Wilbur had patiently waited. We chatted about the Fisher towers and the climb and the hike out was enjoyable, although a light rain made for some slick terrain. It had been a memorable climb and I couldn't be more thankful for such a great partner. 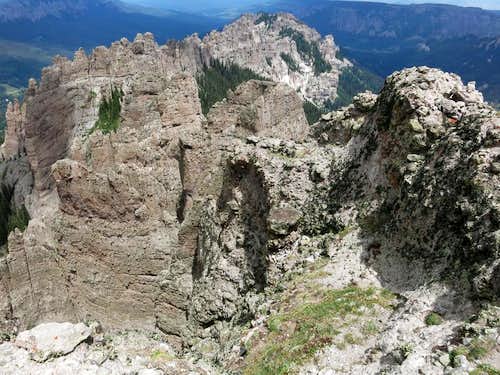 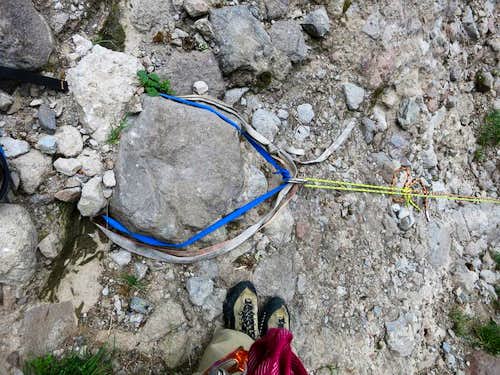 More photos and a routes description can be found here...
http://www.brianinthewild.com/turret-ridge-west-gully.html

View "Nothing but the best!" - Turret Ridge Image Gallery - 6 Images