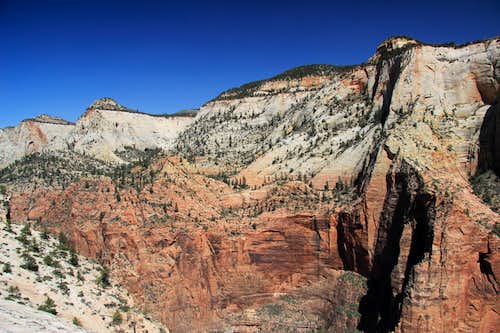 There are two main access points.
The first, and by far the most popular, is the Weeping Rock shuttle stop in Zion Canyon. Spring through fall, you must use the free shuttle system and ride from Springdale, the visitor center, or, if you are a guest, the Zion Lodge.
The second is from outside the park at the East Mesa Trailhead. Exit the park's east side and soon turn north onto a well-marked road called North Fork Road. (This is the way to Chamberlains Ranch, where through-hikers of the Virgin River Narrows begin.) Make a left turn to the Ponderosa Hunting Club and Cabins and follow signs to the Observation Point trailhead. The last few miles get increasingly bumpy and high clearance is recommended, but most passenger cars can make it almost all the way (might have to park up to a quarter-mile away). These roads turn to dirt, which means they turn to mud when it's wet, so be aware of recent and forecast weather conditions or risk getting stuck.
A third starting point is from a short spur connecting to the East Rim Trail; this spur is in the vicinity of Ponderosa as well. However, it is longer and more strenuous than it is from East Mesa and really has no benefit unless one is backpacking and thus out to see more of the area.

All but the last couple hundred yards is a trail hike, and that last part is just Class 2.
From Weeping Rock: Hike the steep switchbacks to Echo Canyon. At a junction, bear left for Observation Point. The next junction is with East Mesa Trail. To the left, it is 0.3 mi to Observation Point. However, Observation BM is directly ahead of you. Leave the trail and hike up. RT about 8 mi, with about 2300' of elevation gain. The scenery is spectacular on this route. Good signage should ensure you don't take a wrong turn.
From East Mesa: This way is not so scenic, but it is so much faster and easier. Observation BM appears before you shortly before the junction with Observation Point Trail. Leave the trail and head up. RT about 6 mi, without much elevation gain. The TH is at 6500'; the summit is just over 6700'. Although there are some ups and downs, they are mild and make almost no difference. 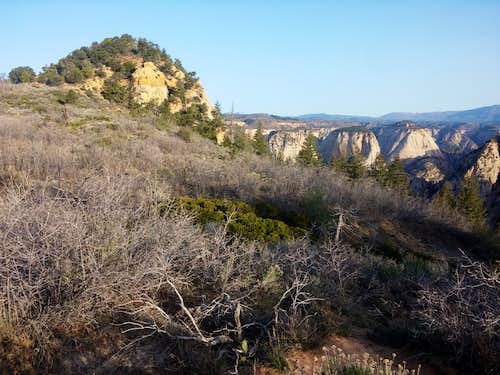 Observation BM from East Mesa Trail
Recommended: Arrange for a vehicle shuttle and hike from East Mesa down to Weeping Rock. Distance is around 7 miles, and almost all is downhill. Take the shuttle out of the canyon and back to where you parked. Best: get an early start so you can leave a car at Canyon Junction, the farthest up Zion Canyon one can drive without being a lodge guest (guests can only park at the lodge).
If you don't have two vehicles, don't worry. Contact Zion Adventure Company, which specializes in guided canyoneering trips and equipment sales and rentals but also runs trailhead shuttles. Prices are reasonable and the staff is very friendly, and the service is highly efficient. They were also nice enough to pick me up at Canyon Junction so that I could leave my car there rather than at their place in Springdale, thus cutting off a good deal of shuttle hassle. 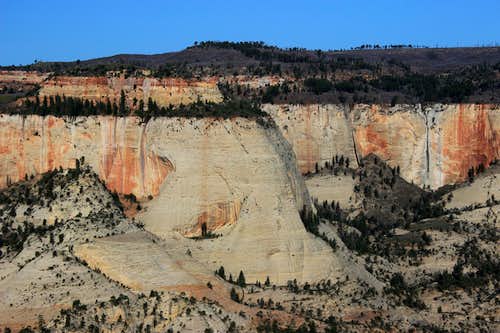 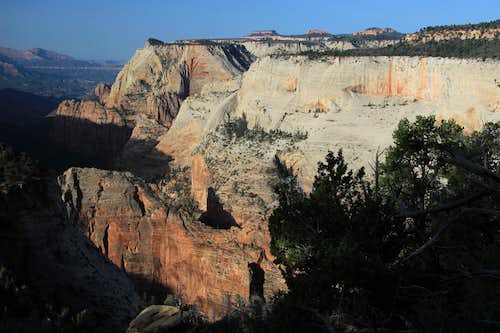 The Sentinel and Angels Landing from Observation BM

Spring and fall are best. Winter can be snowy or icy up high, and some of the trails have exposed sections. Summer is often in the 90s, not prohibitively hot but still not comfortable for most, and dehydration and heat-related illnesses are risks.

Watchman Campground, near the Visitor Center, is not far away. This campground is open all year, and you can make reservations for certain months at recreation.gov. South Campground is practically next to Watchman. Both campgrounds fill early in the morning during peak visit times.