The_Cat_Guy
Add photos See all photos
If you are lucky enough to live in more alpine regions, lets say the Alps or BC then snow in October is a usual sight for you. But not here in Greece. Even though this is the marker of the beginning of the winter season, it is also another important (List of 10) summit. It is a story of the successful ascent of Greece’s 7th highest summit, Korakas.
This story is taken from my blog: https://greekaltitude.wordpress.com/ go follow me there for more trip reports.

With that out of the way, let us proceed. Once again we were able to get some time of school and work given the national holiday of 28th of October that we get here in Greece. So with that in mind we decided to head to Agios Athanasios and the Vardousia mountains to summit the Korakas peak at 2495m. Lucky for us, the forecast gave snow and relatively cold temperatures, talking 0C to -2C at the highest altitudes, even better no wind was on for the day of the attempt. 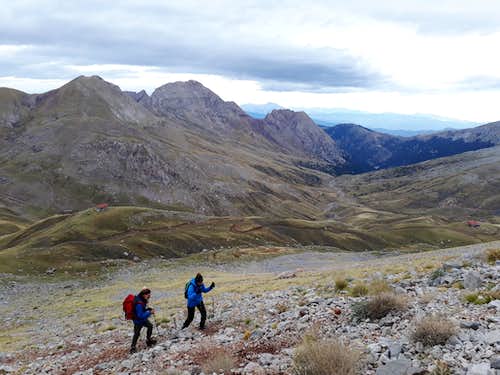 Hiking up view of refuges
So Friday passed and Saturday is here so its time to attempt the climb. We left our hotel at 8:30 and drove the 45 minutes to the POA refuge exactly on the trail head. Note that this is the closest you can go to the summit at 2000m of elevation. We started hiking at around 9:30 and luckily due to the clouds overhead and the direction of travel (West to East) we hiked without direct sunlight and relatively great temperatures (approx -1C).

The views were pretty good and the slope was gentle and thus, we proceed to hike up quite fast. At around 30 minutes into the hike we stumbled on our first problems. My mother and hiking partner suffers an issue that does not allow for blood to flow to the finger tips if the temperature is low. So the rather cold temperatures of the day made her unable to climb without severe issues to her hands using her gloves. Luckily she had brought a second pair of gloves that ended up being warmer, so catastrophe 1 has been avoided. After that we quickly hiked under the colouir entrance at 2200m. To note, due to the steep nature of the climb you have to climb into a steep colouir that is filled with fallen rock pices, directly under the head-wall. That colouir is the only safe way to access the summit plateau and also the only safe way to down climb.

We reached the upper reaches of the slope after around one hour, then we had to traverse under the steep head-wall to reach the base of the ‘Portes’ pass that allows for safe passage to the upper plateau. Here we found the first patches of snow, more like sugar than patches, but oh well. Just under the final traverse we met with a climber coming down that informed us of the snowy nature of the higher altitudes. We made the final traverse to the Portes colouir and finally made our way up to the pass. We were amazed by the views we were able to see and well, a bit scared of the distance we had to cover. 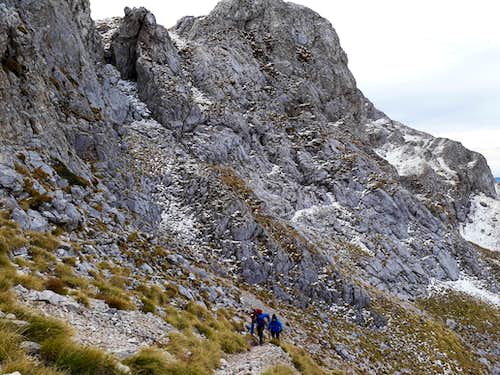 Hiking under the headwall just under 'Portes' 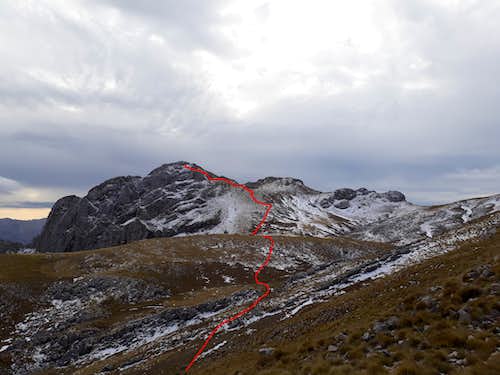 The route we used to make it to the summit
After a small break, hunted down by the impending low clouds that were less that 30 minutes away, we hiked fast through the plateau. We crossed the plateau by climbing up the small hill, and we made it under the summit in under 15 minutes. From there the last section was the toughest. We had to switchback hike (with no trail) up to the saddle. After some 10 minutes of hiking on light snow we made it to the saddle. Here the true issues became apparent. At the saddle we had to climb a grade 3 two move (about 2m) high chimney wall to access the ridge beyond. With the fog fast approaching we made it to the ridge and a larger issue showed its face. We had to cross a 20 meter long traverse on ice, on our right was more ice on the slope and on our left was a 300m high drop. Exposure to the max. 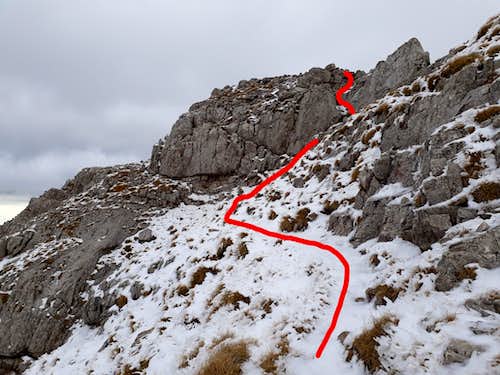 The traverse to the summit block

After the traverse was done we had to climb a grade 3 two move (1m high) chimney to access the summit block. After summiting we took two summit selfies and quickly down-climbed the two technical sections as the thick fog rolled in. From there thick fog swallowed the entire plateau, we could see up to 5 meters ahead, no more, no less. We hiked our way to the ‘Portes’ entrance so we could safely down-climb purely using my phone as a GPS. After reaching the entrance we ate and calmed down to ready ourselves for the hike down. With low visibility and sore feet we moved forward. 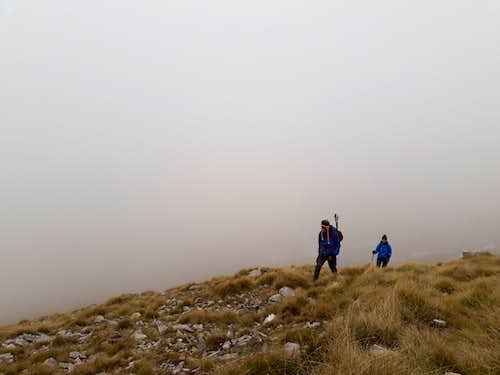 We down-climbed for about 30 minutes, passing the more demanding sections and then the fog broke as we were able to climb the last 15 minutes to the car with a clear view ahead. Luckily the only casualty we had on the hike down was my toes comfort.

Finally after 3:30h car to car and 540m of vertical gain through 4km of distance we made our way to the car susecful with one more peak in the bag. Now with 3 out of 10. Only 7 left.

On a side note, after the climb we had some tea at the EOS Amfissas refuge (the first one on the way up), the refuge is great and the hosts amazing, if you are lucky enough to find it open definitely go and have a drink and enjoy the fire. 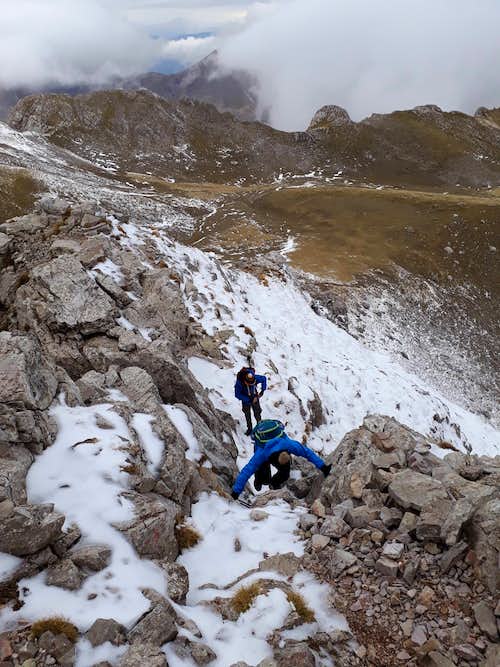 Climbing the final chimney to the summit 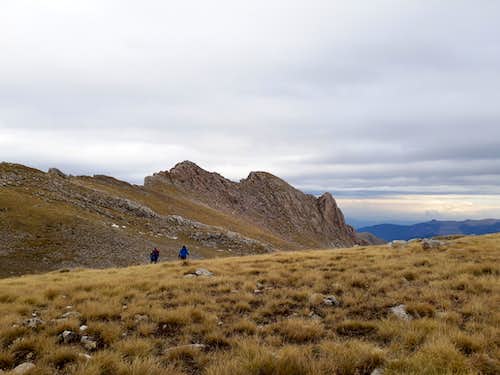 Hiking to the summit with portes at the background 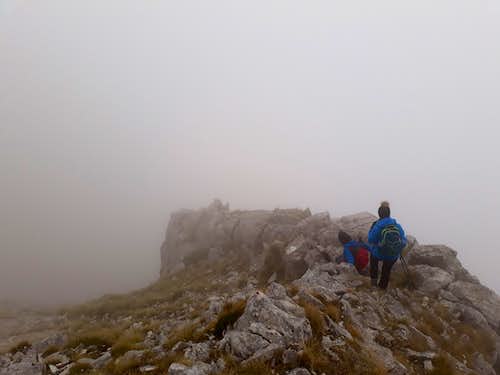 Hiking down Portes with thick fog