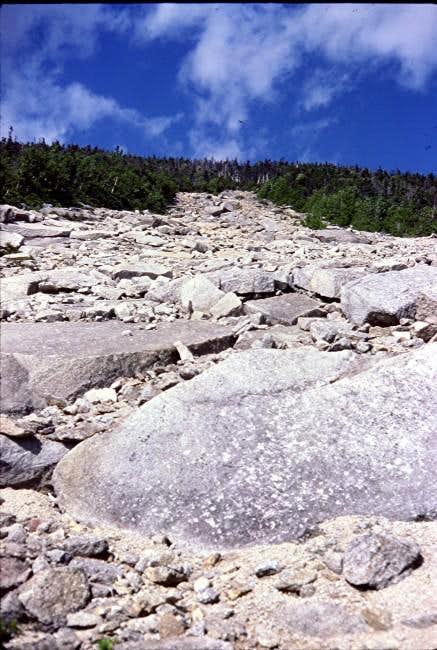 This mountain and its west peak stand over the Nesowadnehunk Stream valley just east of the stand alone Doubletop Mountain . The first thing I remember about this mounain are the big bare areas on its south face. These are landslides that have come down as recently as the 1938 hurricane. I don't think that they have changed much since I first saw them in 1956. This is the last in a series of peaks connected to Katahdin and proceeding west from that mountain. On its backside is a large unvisited spruce flat called the Klondike. The elevation of the "klondike" is 2900 feet and it is shaped like a triangle with OJI at its southwestern vertex. Prior to the 1938 hurricane the shapes of the landslides on OJI spelled out OJI. They have become more nondescript since then. There is a gigantic boulder near its base at the park perimeter road near the now closed north trail. I missed seeing this titanic boulder on my climb. The west peak of OJI is a bushwack adventure. The Owl to the east is obscured by the intevening Barren Mountain.

Drive north from Boston Mass. to Portland and up I 95 to Bangor and turn north on that road continuing 60 miles to Medway, Maine. at Medway turn west on Maine route 11 and drive through Millinocket Maine getting a last prepared meal at perhaps the McDonalds there. Be sure you have enough bug repellant for the black flies and mosquitos. Head up northwest to the gatehouse for Baxter State Park about 25 miles northwest. You might want to stop at the dike between Millinocket and Ambijejus lake to get some snacks and admire the view of Katahdin. Continue on the the gate house and pay a day use fee if out of state. Take the left fork of the road northwest past some ponds and abol campsite to Katahdin Stream Campground. Travel a couple of miles west to Foster Field near Nesowadnehunk Stream. The trailhead is on the north side of the road but you might ask the Katahdin Stream ranger for its exact location

All Baxter Park trails are painted a baby blue. Find the trail up the south slide posted on the north side of Foster Field. Walk back into the forest through swampy areas .4 miles to the fork between trails until the ascent starts. Pass through mixed coniferous and deciduous forest ascending to the base of the slide. The slide is composed of large talus and is quite steep. Exit to the left at the top of the slide and tunnel through Krumholz to the open top of OJI. Your distance is 2.7 miles via the north slide or 2.9 miles via the south slide and 2400 feet of ascent. If going on the north slide (trail no longer maintained owing to its danger in descent) at 1.1 miles from Foster Field you can see the giant boulder 45 meters north of the trail. It is 73 feet long and 25 feet tall by 48 feet wide. After your detour to the giant boulder continue on the the first smooth ledges and then up the landslide to the top 6 hours is a common tour de OJI time.

Here is the weather