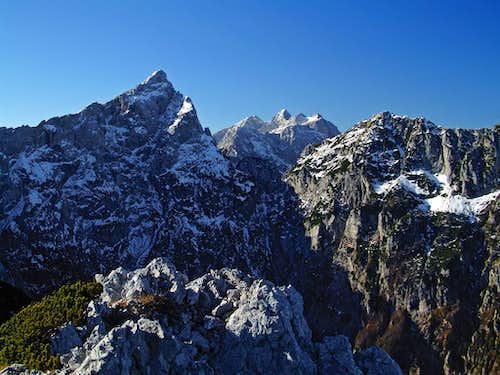 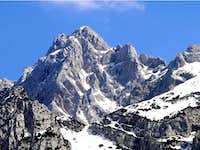 The central part of Kamnik Alps ends on its eastern side with a beautiful high mountain, one of the most impressive in the whole group. Also its name - Ojstrica = Sharp Peak - suggests this.

The most impressive side of Ojstrica is its north wall (Logarska dolina is more than 1500 m below the summit). It is more than 500 m tall and offers many beautiful climbing routes. Also tall is Ojstrica's east face. From the summit and from the long SE ridge, a 700 m high, steep rocky face is falling down to Robanov kot valley. Quite steep are also the southern slopes, rising above the broad, green meadow of Korošica, 1800 m, and the south-western slope, over which the easiest ascent goes.

The mountain has three distinctive ridges - the west ridge goes towards Škarje notch, 2132 m and further to the Planjava summit, 2394 m. It's a part of the main Kamnik Alps ridge. From the summit towards the north-east a sharp ridge goes down to the Škrbina notch, 1790 m, which separates Ojstrica from the neighbouring summit of Krofička, 2083 m. Finally, the southeastern ridge goes down from the summit of Ojstrica to the head of Mala Ojstrica (Small Ojstrica), 2013 m and further down to the plateau of Dleskovška planota. Perhaps also the short south ridge should be mentioned. It rises just above Kocbekov dom on Korošica meadow and offers also an easy (UIAA III-) climb on top. In the short summit ridge of Ojstrica there are two peaks, higher is the western one.

Being so attractive, the summit keeps a detailed history of ascents. In 1823 E. Joanelli reached the summit, doing his job as geomether. In 1894 Fran Kocbek climbed the summit by the SE ridge, which is now named after him. And there's one more attraction. In the middle of the north wall, some 250 meters high, there's the entry into the so called Ogrinova luknja - Ogrin's hole. The cave is very narrow to enter and in 2007 the first 60 meters were explored. The continuation is still unknown.

As a sharp, white limestone peak, Ojstrica is beautiful from any side. Even if being a ridge mountain, it raises high enough to make an impression on an observer, almost regardless of a standpoint. Still, some views are excelling others. 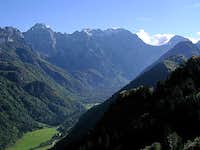 From the beginning of Logarska Dolina, we see the north wall of Ojstrica in a perfect harmony. This is the famous view from Sestre Logar meadow, where the sharp peak of Ojstrica is complementary to the powerful, broad massif of the neighbouring Planjava. 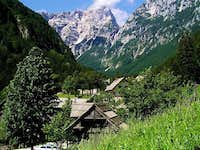 Whoever comes into the kingdom of Roban's farm, will be surprised by a beautiful view on a sharp mountain, rising some 1700 meters higher, at the end of the valley. That is Ojstrica, showing its sharp peak above a high ridge. 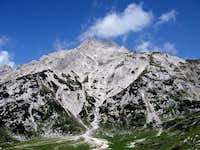 The view from the south is a bit less impressive, because the altitude difference to the summit is not so big. But the sharp, double-peak summit is seen from everywhere, also far from the distance. The more we approach Korošica meadow, the clearer are the features of Ojstrica's south face. 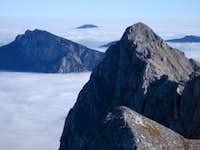 Rok Ajdnik - from the W 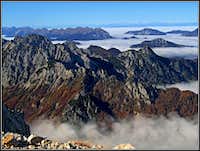 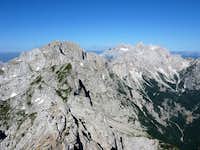 Branko - Towards the west

Because of its position Ojstrica offers a great panorama. Towards the south the green meadow of Korošica, beyond it the broad carst plateau of Dleskovška planota and further the hilly rest of Slovenia. Towards the east the neighbouring mountains of Kamnik Alps, deep down the green valley of Robanov kot, in the distance forehills. On the north the most impressive is the view deep down into the green Logarska dolina (valley). Beyond hilly landscape one can see the Gurktal Alps and groups east of them. And towards west all the big summits of Kamnik Alps can be seen, in the distance Julian Alps and in a clear day one can see as far as to Grossglockner.

The Diversity of Nature Around Ojstrica

Ojstrica stands in the middle of high alpine world, which is very diverse. On the north and east we have two of the most beautiful valleys of Kamnik Alps: Logarska dolina (often called also the Gavarnie of Kamnik Alps) and Robanov kot. Broad alpine meadows, high vertical walls, unspoiled nature, waterfalls in Logarska dolina, these are only a few of highlights. On the south there is a high carst plateau of Dleskovška planota. Covered with pine bushes, a few alpine meadows, some rocky summits peeking out. The rocky part of main Kamnik Alps ridge is also impressive - high walls above Logarska dolina, some of them with a healthy, solid rock, appropriate also for more difficult climbs. And a special pearl is the broad, flat meadow of Korošica. 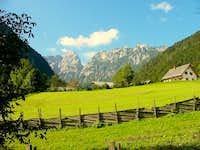 1. From the south-west. The trailhead is on the road into Kamniška Bistrica (valley), 1 km before the hut and the end parking place, 571 m, from where we reach Korošica hut through the valley of Kamniška Bela and Presedljaj (saddle, 1613 m). From the road to hut 4,5 h.

2. From the east and south-east. By car we can reach Dleskovška planota (plateau). In Podvolovljek valley we take a decent macadam road, which brings us to Planina Ravne and the altitude of 1500 m. From the end parking place Korošica hut (or Sedelce (saddle) for the SE ridge ascent) can be reached in 2 h 30 min (2 h 15 min). The other starting point can be the end of road below Planina Podvežak, 1400 m, some 500 m before reaching a hunters hut.

3. From the north-east. We can drive into the beautiful Robanov kot (valley) only to the farm of Roban. From there to Korošica hut you have then 4 h (to Sedelce 3 h 45 min).

4. From the north. The trailhead is at 835 m in the beautiful Logarska dolina (valley) by the mountain hut.

See them all on the map - guidebook above. If you are arriving from the south or south-east, you will certainly reach the Korošica meadow, where the Kocbekov dom (hut, currently in repair) stands. For detailed descriptions of Korošica approaches, see the page of Kocbekov dom. Being on the Korošica, you can do an ascent by the SW slope, or from the Sedelce (a grassy saddle, 50 meters above the Korošica), you can ascend by the SE ridge. Both approaches can be combined into a beautiful round tour.

1. From the Korošica hut - S slope

Not difficult, just on a few places steep walk-up, secured with some pegs. 1 h 30 min. In good conditions it is also appropriate for skiing. For the whole S ascent from Kamniška Bela see the route description.

The marked route starts on the Sedelce (saddle), 1900 m. This can be reached from the Korošica (15 min), or from any of the paths which lead to the Korošica from the E and SE (fromthe  Robanov kot valley or from the Dleskovška planota plateau). The ridge is marked, on the upper part a scramble, also protected on some places - medium hard. 1 h 15 min from the saddle. For the whole ascent from Robanov kot, see this route description. For the whole description of the paths from the S and SE, see the approaches to Kocbekov dom.

3. From the Škarje notch

If we come from the west, from the neighbouring Planjava (2394 m), or from the Kamniško sedlo (saddle), we can follow the main ridge of Kamnik Alps, reach the Škarje notch, 2141 m and ascend from there the summit. From the Škarje 1 h. For the whole description see this page (approach #6).

4. From the N, over the Škarje notch

From the Logarska dolina, 800 m to Koča pod Ojstrico (hut, 1208 m), then east of the north wall to the Škrbina (notch), 1790 m, into the E face and over it on the NE ridge, across the upper part of the N face to the NW ridge and to the highest point. Very nice ferrata (above the Škrbina notch), medium hard and exposed. A long ascent, from Logarska dolina (valley) 4 h, from the hut 3 h. All in all perhaps the most beautiful route of this type (ferrata) in the Kamnik & Savinja / Steiner Alps. See also the route description. 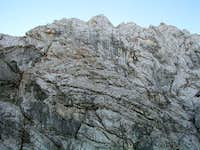 Climbing Routes in the North Wall

There are no limitations. The mountain is in the middle of a parc area. For the road into the Logarska dolina you must pay toll.

There are several good mountain huts around Ojstrica: