Summits, described on this page

Even if I'm an advocate of writing names of mountains on multi-lingual areas with all names, I shall in this case use only the Slovenian name. The other two names, the Italian Monte Osternig and German Oisternig are transcriptions with the later origin.

In addition to the main (western) summit, there is also a minor eastern summit, where a big cross stands.

Ojstrnik is the last high summit in the Carnic Alps Main Ridge, going from the west towards the east. Despite its name (in Slovenian language 'oster' means 'sharp') here only little is left of Carnic Alps rocky nature. Only the summit slopes are mixed rocky and grassy, already 200 meters below only grassy slopes are all around and below the altitude of some 1600 meters there are mainly broad forests.

The mountain is very popular. Firstly because of its panorama and secondly because of its easy access. Many forest roads and cart-roads, although closed for public traffic, reach the high regions of Ojstrnik, the highest one coming even to Feistrizer Alm / Bistriška planina, 1720 m. So primarily this summit is a nice hiking destination, in winter and early spring also a very nice tour skiing destination and I believe that many roads offer also many mountain-biking possibilities.

Some interesting places to visit will be mentioned in the next chapters. Here let me mention only Vorderberger Wildbach (Vorderberg Wild Creek), north of Ojstrnik mountain, which has in its lower part, just above the village of Vorderberg, a short, picturesque canyon. It looks that the trail which was built through the gorge, is now ruined, so the gorge can not be passed without canyoning equipment.

The second summit in this small group, which is worth visiting, is the grassy Zahomec / Monte Acomizza / Schoenwipfel, rising SE of Ojstrnik / Oisternig. It is lower, but because being even closer to Julian Alps, it also offers a great panorama. NW of its summit is Zahomška planina / Achomitzer Alm, where also a mountain road reaches. So in summer this area is also very popular for mountain biking. In winter almost all slopes are nice for skiing (difficulty: F on the SAC scale). On the W-SW ridge, just on the timberline, stands a cute St. Ubertus / Hubertus chapel.

Nice ex shepherds paths, today converted into high mountain roads are connecting Feistritzer Alm / Bistriška planina and Achomitzer Alm / Zahomška planina. On both alpine meadows there are also private huts. Just in the mid way, on the eastern slopes of Gozman, a cute chapel stands. It is called Marija Snežna / Maria Schnee and was erected by people of Bistrica ob Zilji / Feistritz an der Gail.

It's hard to imagine, but Bistriška planina / Feistritzer Alm (meadow with many weekend huts), on the altitude 1722 m, was in devon, some 380 million years ago, a seabed. It was a warm, tropical sea, full of corals, crinoids, shells and algae. Their petrified remains are abundant on the gravel slopes above Bistriška planina and in paleozoic limestones along the path on thr summit of Ojstrnik.

Otherwise, the whole upper part of Ojstrnik is made of Devonian limestone. The lower parts of its northern slopes are even a bit older, made of grey, banded limestones from late Silurian and early Devonian. On the southern side, the rocks nature starts changing on Feistritzer Alm. Rubble and moraines are covering the bedrock, but that one is made of carboniferous shales and sandstones, stretching to Achomitzer Alm. 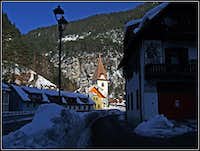 Northern (Austrian) trailheads are in Gailtal / Ziljska dolina. Driving towards the west we can reach villages of Feistritz and Vorderberg from Villach in some 18 or 27 kilometers. From Bistrica ob Zilji / Feistritz an der Gail, a good, but steep mountain road goes up to Bistriška planina / Feistritzer Alm, 1700 m. It is opened for public traffic, but when snow lies on it, even if it's cleaned, the ascent is very hard.

From  the southern (Italian) side the best starting point is Valle di Ugovizza (valley), into which we drive from the Udine - Tarvisio - Villach highway from the village of Ugovizza / Ukve. This road is closed for public traffic on the altitude of 1210 m.

On the web, you can see a detailed map on: http://www.austrianmap.at/, but perhaps even more precise and illustrative is the map below - explore it!

5. The other option from Vorderberg is the western road, which goes above Vorderberger Wildbach (creek) and by Dolinzabach (creek) to Lom (saddle) in the main Carnic Alps crest and then as described in #1 to the summit. 5 h. 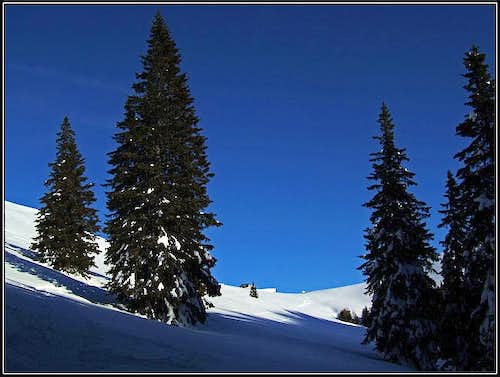 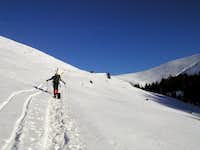 Because Ojstrnik has nice slopes on all sides, a few ski tours can be chosen, considering snow conditions. Often we can choose between the southern firn and the northern powder snow.

1. From Valle di Ugovizza, as described above in #1 summer ascent. Very nice, except the dense forest SW of the summit.

2. From the NE, from Feistritz as described above in #3 summer ascent. We don't need to go all the way to Feistritzer Alm, but can ascend the summit also directly from Untere Alm (and ski down there) - but that's steeper and harder.

3. From Lom saddle directly, or over the NW slopes. Perhaps this is the most beautiful ski tour on Ojstrnik. We reach Lom saddle either from the N or from the S, then we follow the cart road across the NW slope till a distinct ridge. On the NW slope we can find up to 600 altitude meters of powder snow, all the way down to Dolinza/Dolinca meadow.

4. Skiing down on Werbutzalm and further to Vorderberg. We probably will not ascend by this route, but if we ski from the summit by the E ridge to a broad saddle, there we find a steep ravine, which brings us down on the road to Werbutzalm. From the meadow, we continue northwards down through a light forest to a hut, where we hit a forest road. Then by the road down to Vorderberg. It is also possible to ski down by the rib, going down west of Werbutzalm.

5. From Val Bartolo. We go by the road on Bartolo saddle, then by the other road on Achomitzer Alm and further on Feistritzer Alm and on top. Long and not much skiing, except on the summit part.

Any time of the season. 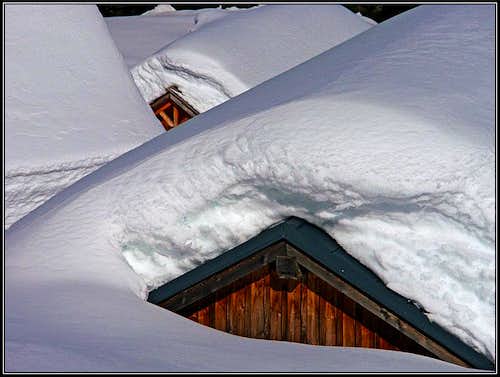 The ascent can be normally done in one day. In summer three huts are supporting outdoor activities around Ojstrnik: