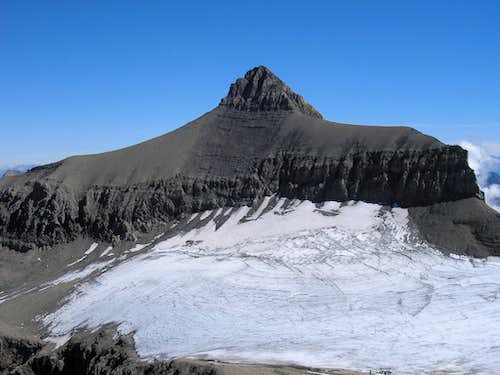 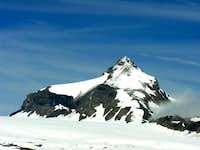 The Oldenhorn (Becca d' Audon) is a picturesque peak located near the far western end of the Bernese Alps. Its summit is the common point of Cantons Bern, Valais, and Vaud. It is believed that the peak was climbed as early as 1811. It was certainly climbed by a survey party in 1835. The summit is recommended for its impressive views. The East Ridge Route is included as part of a round tour including Les Diablerets (3209 m) and Tour St. Martin (2908 m) in "Berner Oberland, Die 100 Schoensten Touren" (The 100 Finest Routes in the Berner Oberland) by Grossen and Rebuffat.

The easiest approach is from Col du Pillon or Gsteig / Reusch via cable car to Sex (Scex) Rouge. You can also approach from Col du Sanetsch (You can get there by cable car from Gsteig or even by car from Saviese). Its a 2 hour hike through what the Tsanfleuron glacier left behind when it grew smaller: A wide, wild area of rocks, ponds, valleys and swiss army grenade ammunition. Link to area information including driving instructions, bus and train connections and cable car schedules: Glacier 3000 Panorama Map showing cable cars and local geography. Topographic map (Swiss-Geo)

Check first to see if the Swiss army is using the Tsanfleuron glacier for grenade training.

Snow forecast for the region