On the "Ruth of the North Cascades"
Washington, United States, North America

On the "Ruth of the North Cascades"

Ruth Mountain is one of the hundreds of gems in the North Cascades. It is a heavily glaciated peak yet a peak that in certain times of the year one may consider roping up overkill. Like the south spur of Mount Hood in May, Ruth Mountain's glacier holds together on good years well into late July. Most summit the peak during early July with just an ice axe, helmet and crampons. What Ruth Mountain lacks in elevation (around 7115 feet of elevation) it makes up for in terms of glaciated terrain and intense views. For Mike Lewis  and I, we really wanted to take advantage of this time because Ruth Mountain, home to its excellent views, is one of the classic easy snowclimbs in the North Cascades. With the hot weekend coming up we thought it would be the best time to check out this great mountain. 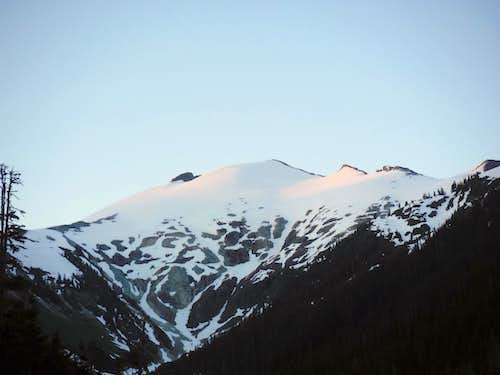 Morning Light on Ruth Mountain
At 4:00 am we woke up at the Hannegan Pass trailhead and started our 5 mile long slog up to Hannegan Pass. Though it was 4:00 am, it was already quite warm on the trail. I knew that I had to make speed because I knew once the sun hit the trail the heat could really cause issues with us on the mountain. On the way up we saw the sun's rays hit off of the mountain. Though it was a warm morning hike it was a rewarding beginning. First we got amazing views of the majestic Mount Sefrit with the snow reflecting the sunrise that was slowly going up. Within minutes we got a view of our goal up ahead, the amazingly beautiful and snow-capped Ruth Mountain. Though we did stop to take pictures, we knew we had to head up fast or the sun would soon heat up the area. Within 2 1/2 hours we were at Hannegan Pass and about to begin the really fun part of the mountain.

Unfortunately the rest of the climb to the summit was not so easy. The route to the summit had a lot of patchy snow on it. The first obstacle was a small little peaklet that we had to go over. This 100 foot climb up and down was no major issue but what lied after it was a major major challenge. The second obstacle was far more challenging. That was traversing Point 5930. We started by going up a gully that had a mixture of fast melting snow combined with water going down and some loose pebbles. It was supposedly a well established route or "trail" but it was no fun in the conditions of the day: a mixture of loose snow and water filled the steep gully trail up to the open area. It was steep and nasty but the worst was yet to come. 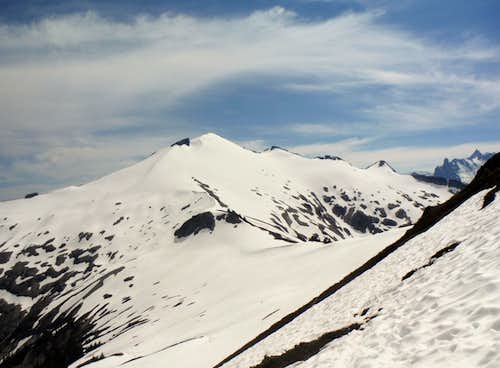 The ridge leading to Ruth Mountain once past the sketchy section
Mike and I then came up past this area and were greeted by a very steep snow traverse with a very bad run-out. Mike made the correct call and decided to go high here because if one of us were to fall one of us would need all the snow we could find in order to stop ourselves for self-arrest. This section made me very nervous and at one point I thought about turning around and heading back later in the year when this is just an easy trail. Luckily Mike talked me out of turning around here and we slowly made the traverse across the sketchy snow section. For me, my crampons were the selling point. Having traction with the crampons really helped me with my confidence on this section. We made it past this section which clearly turned out to be the crux of the trip and soon we saw in full view the route up Ruth Mountain. From there we continued up toward the summit of Ruth Mountain. Once we got past the pass section between Point 5930 and Ruth Mountain we took a break and got ourselves ready for the final push to the summit. 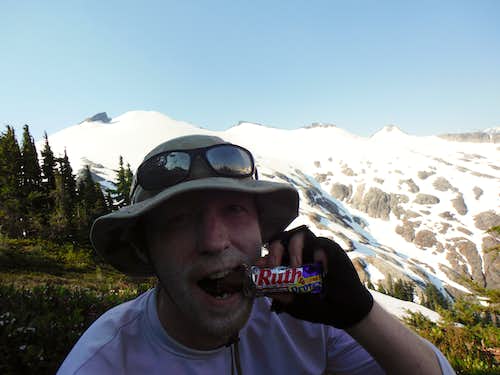 Ready to chomp down Ruth!!

The Snow Climb and the Summit 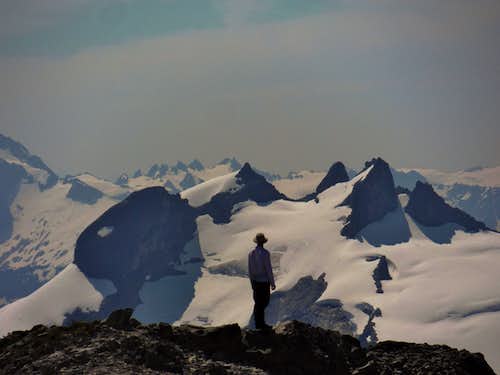 Mike Lewis staring at route up Icy Peak
The final climb up to the summit of Ruth Mountain is a snow climber's dream. Certainly you can climb this quickly but that would destroy the point of heading to this summit. The snow on this mountain was firm yet the steps on this mountain were easy to kick in. We decided to wear our crampons here though one could get away without wearing them. They helped us get good traction in the snow and we enjoyed our snow climb all the way to the summit of Ruth Mountain. We did pass by one crevasse to our right. It was just starting to open up but there looked to be a couple weeks before it becomes a major issue on this mountain. As we climbed up to the top Mount Shuksan and Mount Baker really came into view.

Soon we were on the top to enjoy at least when we first were on the summit the hazy smokey views. See we spent over three hours on the summit on this mountain. I took an hour nap on the mountain while Mike cooked up a great chili and macaroni and cheese meal. While we were there the smokey views started to clear up and many of the Cascades slowly came the view. The temperature on top of Ruth Mountain was a comfortable 70 degrees and whatever breeze we had was very light. Nature provided the entertainment as we listened to glacial ice falling from the nearby Noonsack glacier by Mount Shuksan. As the smog cleared Mount Blum clearly came into views along with Bacon Peak and many other mountains in the region. We literally had to peal ourselves off the summit but after while it became time and unfortunately I had to be at work early the next morning. 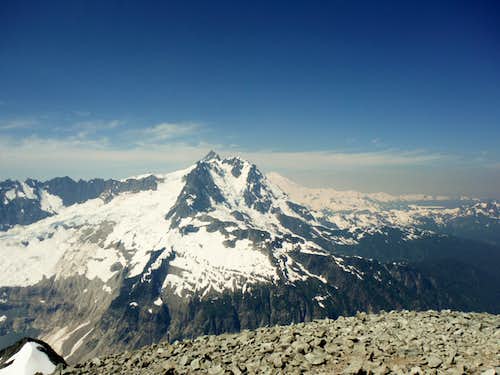 Glissading, Bushwhacking and Slogging Back in the Heat

Sounds crazy but with no real crevasse danger Mike and I decided to glissade the bulk of the way down the Ruth Glacier. We went down with Cathy, a person that we talked to for a while on the summit of Ruth Mountain. This was a secondary highlight to what was already a great trip. We took three long glissades down the mountain. It is always real cool to knock off 1500 feet of elevation gain in 10 minutes. Due to the hot day none of us cared if we got wet. In fact we enjoyed glissading down the mountain where we got a nice ride while enjoying beautiful scenery. 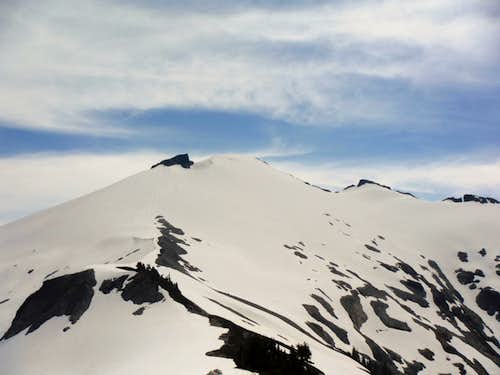 A look back at Ruth Mountain
Once past the glissade we made our way down back to the sketchy snow traverse. At this time the snow was much softer but not too soft to the point that it was unstable. Luckily a lot of people had followed the route so it was well beaten in. I still put on my crampons for this section just to ensure footing though at this point it was a little overkill. It gave me the confidence to cross the sketchy snow traverse. From there we went down the steep part of the mixed trail/ bushwhack/ snow gully. This section required caution not because there was an issue in terms of exposure but just because the footing was very poor. The heat was now starting to make its impact on us. Once down off this section we had to go over that last bump before we got to Hannegan Pass. Never did 100 feet of elevation gain feel more aggravating than this little bump. This probably was because we knew this was the last little incline we had before we were home-free. After going over that aggravating bump we did a quick glissade back to Hannegan Pass. 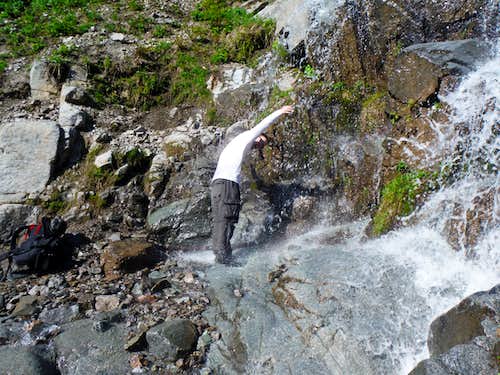 Cooling of from the heat
After taking a long break at Hannegan Pass we got ourselves ready for what was going to be an extremely hot hike back to the trailhead. The views from the hike out were excellent. We were getting so hot that we became miserable. At two creeks we stopped to load up on water along with soaking our t-shirts and bodies so that we could keep our bodies moving. Still, even after soaking our shirts we were still very miserable. At this point we cruised down from the hot day because I began to feel heat exhaustion coming to me. Luckily, soon we were back at the trailhead. 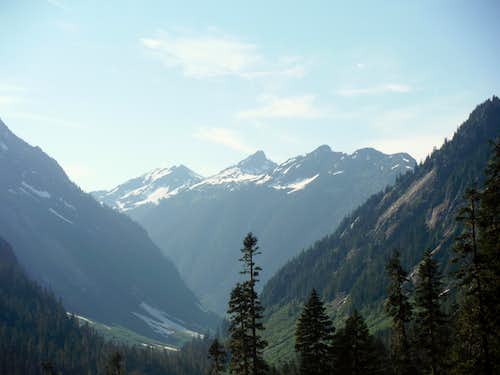 I want to giving Mike a big thanks for first going on this trip and then helping lead through a very sketchy snow slope. Many people in the past weeks have been talking about how beautiful Ruth Mountain was and after going there I can vouch that this is one of the prettier climbs that I have done in a while. Now it's time to find a climb next week that can rival this one. This peak will be very tough to top. Ruth Mountain really is "The Ruth of the North Cascades".

Thanks for taking me up there EK! It was the most beautiful view I've had from a mountain in years.

When I first climbed mighty Mt. Ruth, my partner stated that he was not interested in climbing "some no name peak". We ended up camping on the summit in early season and he was suitably impressed with the views that he acquiesced that it was a decent climb.

I spent my 40th birthday camped on the summit (along with a Corgi!) after making the Ruth-Icy traverse, a classy link up with outrageous views.

I have since recommended this climb to friends who all raved about the alpine ambience and relatively easy approach. It definitely deserves recognition.