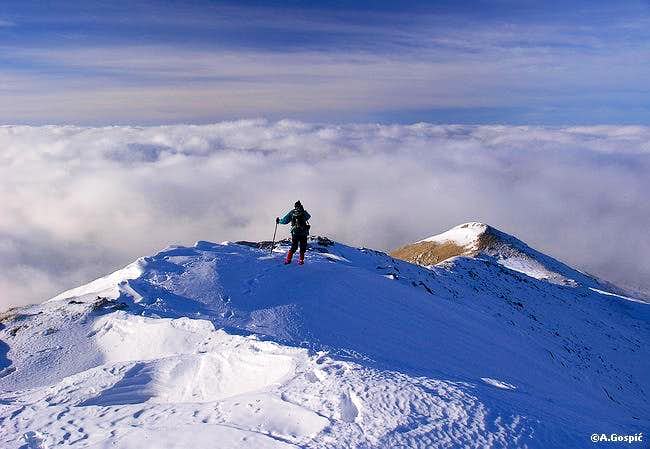 On the summit of Bat (1854m). Right lower is nameless head 1761m over which approach leads.

With these clouds, scenery looks like on Elbrus or on Kilimanjaro, hehehe...

Thanks Vlado! Yes, Kili offers this kind of view most of the time but clouds are much lower there! :^) It was memorable day. When we went from Zadar it was clear but till we reached the starting point, some 130km away, SW wind began to blow and clouds gathered on Dinara, peaks disappeared above. I was so disappointed with this development because you don't go there often, to say the least. I thought that we are going to spend whole day in clouds like it is usual in such situation. But suddenly, some 200m below the summit, it became brighter through the clouds. And soon blue sky appeared and we were above. Nino and me were so crazy happy that we screamed like idiots! hahaha What a reward in the end!

Thanks Samer! It was amazing experience as these clouds weren't steady but actually flowing like a river below us!

Sea of clouds - Above the clouds(Album)