The Opal Range is a compact subrange of the Canadian Rockies, located west of Calgary in Kananaskis Country, near the continental divide, with an approximate surface area (flat map area) of 185.0 square kilometres (70 square miles). The main parent range is referred to as the Southern Continental Range, further divided down to the Front Ranges, though not really on the Front. The broader term of Kananaskis Ranges refers to a grouping of 3 ranges; the Opal Range, the Fisher Range and the Kananaskis Range. <cellspacing="0"><cellpadding="2"></cellpadding="2"></cellspacing="0"> 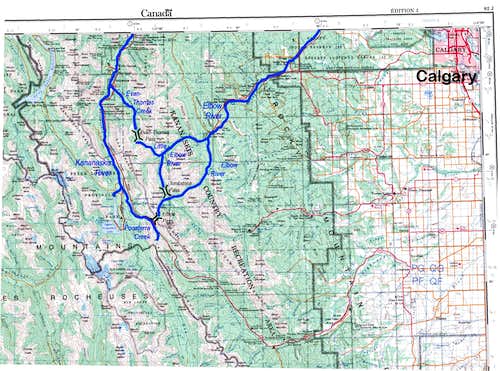 A period that occurred during the Lewis Thrust called the Laramide Orogeny created the Opal Range. The Opal Range is composed of sedimentary limestone, primary the Rundle Formation, with near vertically tilted sedimentary layers providing sharp, sawtooth profiles, deep gullies and steep slab faces. Localized intrusions of conglomerate dolomites and metamorphic quartzite help add colour against the light grey of the dominate limestone. These intrusions at appear at lower elevations and provide dramatic contrast to bright green meadows and sparking creeks. The entirety of the range would have been covered by glacial ice during the last ice age; valley bottoms likely held ice until 10,000 years ago. The local aboriginal people certainly hunted and lived in valleys of the Opal Range during the summer months. The dramatic landscape with many inspirational features must have influenced local spirit mythology. European explorers began expeditions in the within the current boundary of Alberta in 1754 by Anthony Henday, but the local Kananaskis River valley first saw Europeans in 1860’s, at that time the region was dominated by the Niitsitapi (Blackfoot Nation). George Dawson named the Opal Range when he discovered small cavities lined with quartz and coated with what he thought were thin films of opal. However, it was not opal, but a chert with a similar appearance composed of silica imbedded with various quartz impurities. <cellspacing="0"><cellpadding="2"></cellpadding="2"></cellspacing="0">

Exploitation of natural resources began soon after the arrival of the settlers and continued unabated with lumber, coal mining, oil and gas exploration until the early 1970’s. Once the prime resources were consumed, or harnessed by dams, and since carbon based resources were minimal, the continued growth in population in the region made the area more ideal for recreational purposes. In 1977 Peter Lougheed Provincial Park (originally named Kananaskis Provincial Park), and the surrounding multi-use area, Kananaskis Country were established to develop recreational facilities in the region.

Once access was better developed, and more people had time to climb, the major summits were soon conquered. First ascents began in 1950’s, with a surge by Glen Boles and Don Forest during the 1960’s and 1970’s. The focus of climbers was alpine climbing with attaining summits as the primary goal. Despite the verticality, easy access and pockets of good quality rock, no sport crags or multi pitch rock routes (non summit routes) have been developed in the range. Primary waterfall ice climbs were completed as the sport developed, with the top-drawer ice route in the range, Whiteman Falls, climbed in 1979. Apart from this classic route, only minor ice climbs exist; with a two exceptions, the Evan-Thomas Creek drainage has excellent short ice routes and a new bolted mixed venue, Rehab Wall and modern mixed routes in the Opal Creek/Whiteman Falls area. The range is mostly in a rain shadow of the continental divide and only occasionally provides good snow for touring or turns. High winds in the winter are common and rake most of the ridges and basins bare of snow above tree line.

Easy highway access from Highway 40 along the western edge of the range provides the best approach. Highway 40 does provide access from the Trans Canada Highway in the north, and continues south to the Longview area, but the southern section is closed for wildlife protection from December 1 to June 15 each winter/spring. Best vehicle access from Canmore/Banff or Calgary is via the Trans Canada Highway, south along Highway 40. <cellspacing="0"><cellpadding="2"></cellpadding="2"></cellspacing="0"> 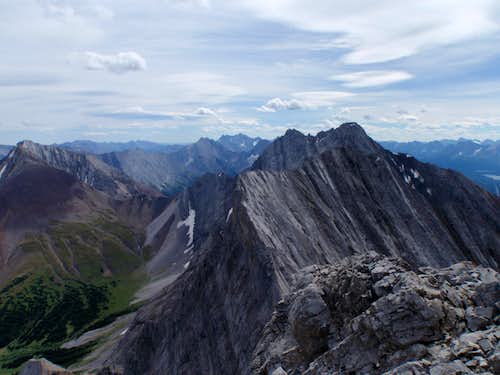 Main Range of the Opals - West side

Main Range of the Opals – East side