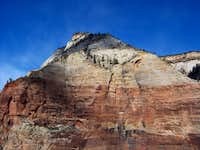 The Organ in Zion National Park is a substantial 400’ high rib that juts out to the east of Angels Landing above the Virgin River. It derives its name from its many tall crack systems resembling organ pipes. Frederick Fisher, the Methodist Minister who named the Great White Throne, also saw the Organ as resembling one of the arm rests for "Gods" throne, Angels Landing being the other. Jim Beyer and company climbed and/or investigated most of these chimneys/cracks in the late 70’s. The most published are the Organasm, III, 5.8, C2 (5.12 free) (4 pitches) and the Organ Grinder, II, 5.9+ (2 pitches). In 2008 we climbed the SE Chimney route, II, 5.6 (5 pitches) and noticed Joe French had installed a summit register and referred to a 5.10 (7 pitch) route he put in during 2006. The last beta we found regarding the SE Chimney route was 1979. 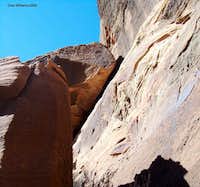 Organ, II, 5.6
The Organ's prow faces Weeping Rock and its north wall faces Cerberus Gendarme. You can park for any of the before mentioned routs on the Organ at a small pullout, 4.7 miles from the bridge on your right. You will have to cross the Virgin River to gain access to the base of the routes, so bring an extra pair of shoes.

The SE Chimney Route of the Organ in Zion National Park is a rather obscure objective, for good reason. It is mostly a sandy and chossy route with a few cacti thrown in to make it a full on Zion “beach party”. That being said, if you like chimneys and are looking for an easy as well as scenic way up the Organ, then no doubt the SE Chimney Route fits the bill. My partner this day,himself king of obscure desert routes, scrounged up beta on this route from 1978 (Jim Beyer and Courtney Simpkins) and 1979 (Gary Colgan and Steve Giddings). Sure enough, the 1979 ascent team referred to the 1978 beta as being hard to follow and of course we thought both versions were somewhat lacking. But once it gets going, it turns out to be a real simple day with the crux being the river crossing during the winter months. (photos)

It would be prudent during the spring and summer to check in at the ranger station to make sure the Organ is not closed to climbers due to raptor season. You do not need a climbing permit but you will have to pay a National Park fee to access the park. During tourist season, you will only be able to access the road by shuttle. I always purchase an annual pass to US and Canadian National Parks. If you are going to make more than four visits per year, I advise this option.

Zion National Park will have manned kiosks on Highway 9 and you will be required to pay a US National Park fee ($25 per vehicle for a day/week pass, $80 for an annual pass-2007) if you drive by them. Backcountry permits are required for all overnight trips in Zion National Park, including climbing bivouacs. Climbing bivouac reservations are available for Moonlight Buttress, Lunar Ecstasy, Prodigal Son, Spaceshot and Touchstone climbing areas. The permit fees are based on group size: 1-2 people: $10, 3-7 people: $15 and 8-12 people: $20. Reservations are available for many backcountry trips in the park. A reservation does not guarantee that you will receive a permit. Reasons that a permit will be denied include high water, flash flood warnings, and wild land fires. Depending upon the backcountry zone, 40%-60% of the total number of backcountry permits are available through reservations. The remainder of permits are available as walk-in permits.

My favorite place for dinner in Springdale is the outdoor patio at Oscars. It also appears to be the local’s favorite. Most of the staff is into climbing as well, so it is a great place to plan your next climbing day and maybe even pick up a partner. Ask for Zach. The Mean Bean across from Oscars is one of my favorite independent coffee houses period, but was sold in 2008, so we will see if they can keep it up.

Summer days are hot (95-110°F), but overnight lows are usually comfortable (65-70°F). Climbing in the middle of the day during the summer in southern Utah is not recommended (we climbed a route on the south face of Organ in early March and it was close to perfect, but of course conditions vary). Carry plenty of water regardless. Afternoon thunderstorms are common from mid-July through mid-September. Storms may produce waterfalls as well as flash floods. Sandstone is weak when wet, so avoid climbing in damp areas or right after a rain. Winter in Zion Canyon is fairly mild. Winter storms can bring rain or light snow to Zion Canyon and much heavier snow in the higher elevations. Clear days may become quite warm, reaching 60°F; nights are often in the 20s and 30s. Zion roads are plowed, except the Kolob Terrace road, which is closed in winter.

There are two great campsites inside Zion’s south entrance. I have stayed at the South Campground just inside the gates. The scenic spots are on the North Fork of the Virgin River. This is a first come, first serve campground via self registration of $16 per night in 2005. This is a popular park however and I advise booking a site ahead of time at Watchman Campground if you think you are going during a popular period. Facilities include restrooms, drinking water, picnic tables, fire grates, RV dump stations. No showers are available at these park campsites but are available at an in town private facility for a fee. There is also a 6-site primitive campground called Lava Point, no water, no fee, and it is not open all year.
Springdale has tons of lodging options as well including a privately owned campground right before the entrance to Zion National Park. If you demand the luxuries of town, I recommend Majestic View Lodge. I have stayed here on several occasions and the rooms are first class with great views. There is also the privately run Zion Lodge which is in the heart of the park (and right across from Spearhead).