Humphrey
Add photos See all photos
Organ Peak is not the highest peak in the Organ Mountains, that honor goes to Organ .  It might seem logical that Organ Peak be the highest, or that the Needle be named the Peak, but for some reason things didn't out that way.  More over, Organ Peak isn't even part of the main body of Organ like rock projections that are so prominent from the west and Las Cruces.  Depending on where you are, you won't notice it or even see it, as it is east of Baldy Peak and mostly blocked from view to the west.

Organ Peak is separated from the main body of Quartz Monzonite peaks so famously know for their steep and exposed rock faces on the western side of the range, by Filmore Canyon.  South of the canyon, the peaks are gentle and rounded, when compared to the steep and rugged rock pinnacles to the north.  The rock is mostly Rhyolite as well, which is extrusive instead of intrusive, as is the Monzonite. Organ Peak is covered in Rhyolite, though there are areas of monzonite outcropping on the ridge leading up to the peak, and it presents a strong contrast to Organ Needle, with it's steep, vertically jointed Quartz Monzonite to the north.  Organ Peak does not have the steep faces, the challenging scrambling, or the feeling of being on a high peak, that the Needle does.  The views of Organ Needle to the north are spectacular, but most of the thin section of organ peaks is hidden behind the Needle, so you will not be able to see all of them.

Organ Peak is also much less frequently visited than Organ Needle. The trail is rough in the mid section, and only in the canyon bottom is it very obvious. It isn't too hard to find on the ridge, but can be confusing in spots.  This peak does some very  impressive views to the south, and the larger section of the Organ Mountains, and of the south face or Organ Needle.

Access is from the west, coming up Dripping Springs Road to the visitor center, or the La Cueva Picnic area.  From I-25 after it splits from I-10 in Las Cruces, take the University Ave. exit and proceed east. This is Dripping Springs Road. past Tortugas Mountain and by the new McMansions. The road turns to dirt, then becomes asphalt again. You will pass by a gate, which seasonally adjusted hours for being open, and the picnic area will be on your left.  The end of the road is at the visitor center.

Alternatively, from the north and east, take US 70 from either I-25, or US 70 from Alamogordo, NM and proceed to San Augustin Pass.  A couple of miles west of the pass, and just west of the small town of Organ, an exit for Baylor Pass Road is found.  You may use Baylor Pass Road to access dripping Springs Road. It is mostly dirt, but is paved for it's northern third.  It provides excellent up close views of the Organ Mountains west face, and it dead ends at a T-intersection on to Dripping Springs Road.


This is a hike with modest scrambling.   Unlike the small section of scrambling for Organ Needle, there is no exposed rock here and it is not as steep.  The main access is the unmaintained Filmore Canyon Trail.  This social trail breaks off from the Modoc Mine Trail, officially the Filmore Canyon Trail for the BLM, just before the Modoc Mine site and the wash you cross to gain access to a small tailing pile.   The trail can be seen traversing the north facing slope of Filmore Canyon when hiking up to the Yellow Rocks section of the Organ Needle trail, should you go too far. 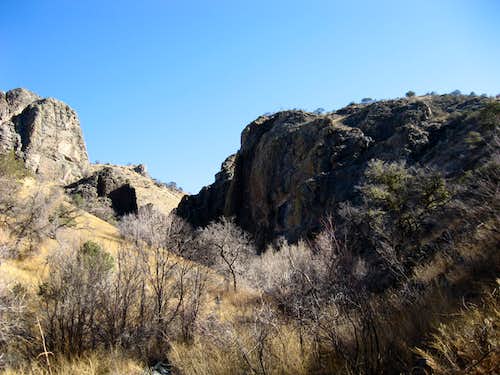 In Filmore Canyon hiking east and looking towards the Narrows area.

For a better than a mile, the trail snakes it's way up Filmore Canyon. Shortly after passing another mine site with the trail crossing between small depressions on either side of the trail, you enter the area known as the Narrows.   A short but narrow section of canyon that is reminiscent of slots canyons in other parts of the southwest.  Winds through here are often fierce, with the narrows acting as a funnel.  Just past the narrows, the trail turns right with the canyon bottom and continues up stream through a small camping area with pine and a nice sized oak.  Past this, there is a small part of an airplane crash, and just beyond that they trail leads you to a rock slab.  This slab is currently underneath of a mostly dead Alligator Juniper, killed by the fire which was a few years ago.  At that point, there is a small, poorly worn social trail leading up slope. If you can find it, take it. other wise, head up slope and a ridge that leads to the main east-west ridge which contains Organ Peak, and a smaller peak with an abandoned observatory on it.


After reaching in main ridge and on the northwest side of a shack which is in the saddle before the observatory, the trail moves towards the ridge and follows the ridge towards the summit.   It is more or less easy to follow, but some sections require more than a bumbling skill.


Technically, this peak is on White Sands Missile Range, but that never stopped anyone before and it is a travesty to think the one decent area of mountain recreation in southern New Mexico could be closed to public access thanks to the military.  The real issue is parking at the fee areas listed in the Getting There section.  You can always park below the gate and walk a little further, and you may have to do that if you arrive before the gates open.  You must also be aware that the gates are locked, and you'll need to be out by that time. Hours vary, with it opening as late as 0800 in winter and closing at 1700 from October to March, and only being open as late as 0700 from March to September.

With the exception of after snow events, during summer lightning storms and perhaps during a wind storm, this can be climbed year round.  Just be sure to be out by the time the gate is locked, and to start early enough to summit and return, or miss a lightning storm in Monsoon Season.   I recommebd against doing this on windy days.

You could camp in the desert range on the west side at the base of the Organs, but you will need high clearance 4 wheel drive to access anything not right off the main north-south road, Baylor Pass Road.  There is a fee camping area on the east side of the range, Aguirre Spring Campground.  It is run by the BLM, and is billed as the only high country camping area in the tri-state region (New Mexico-Texas-Chihuahua, MX).    I guess a Mexican state counts?