Orgelspitze is the one of the peaks over 3000 meter elevation in the Ortler Alpen/Gruppo del Ortles, in the north-east side of the group. In German it’s called also as Orglespitz as well as Argelspitze or Laaserspitze (about the small town Laas/Lasa north to the peak). Its Italian name is Punta di Lasa.

This peak is not the highest and most important peak of the Ortler Group. In the moment of the creation of the page of Orgelspitze, there are already 13 pages created about higher peaks of the Ortler Alpen in SP, and there are only 9 smaller peaks with pages in SP. Nevertheless there are a few reasons why climb this peak:
- Easy to access from Vinschgau/Val Venosta
- No technical difficulty to ascend the summit in summer though it’s a peak over 3300 m
- The view around is excellent, with the valley Vinschgau in the north and with the even higher peaks of the Ortler Group in the west and in the south. This mountain has a unique position as the northeastern outpost of the Ortler Group towards Vinschgau valley. You can see it also on the inserted panorama-photo, thanks for Mathias Zehring:

Orgelspitze is within the boundaries of the National Park Stilfser Joch.

A ridge called Schwarzwand connects Orgelspitze with the peak called Jennewand/Croda Jenne (2962 m) north to it. The saddle between Orgelspitze and Jennewand is in 2799 m elevation.

While Orgelspitze is built of phyllite, Jennewand is built of a much noble material: while marble of Laas. It a white marble of excellent quality with good weather resistance. Famous as building material of public buildings and that of sculptures. Just some examples of famous monuments made of this marble:

The ridge leading to south-west connects Orgelspitze with the neighbouring peak called Schluderspitze/Punta do Sluderno (3230 m). The saddle between the two peaks is called Schluderscharte/Forc.la di Sluderno with the altitude of 2987 m. The only marked tourist path 8A/34 interconnects here the neighbouring valleys of Laaser Taal/Valle di Lasa and Martelltal/Val Martello.

Due to the high altitude of the peak there is no vegetation on the peak. Approximately above 2900 meter elevation it is bare rock.

J. Feuerstein was the first person known to climb this peak - in 1855. The first known ascent from the north-east ridge was Emil and Otto Zsigmondy, and M. Wachter on the 16th July 1881. 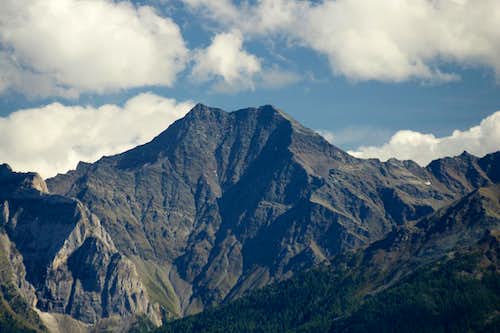 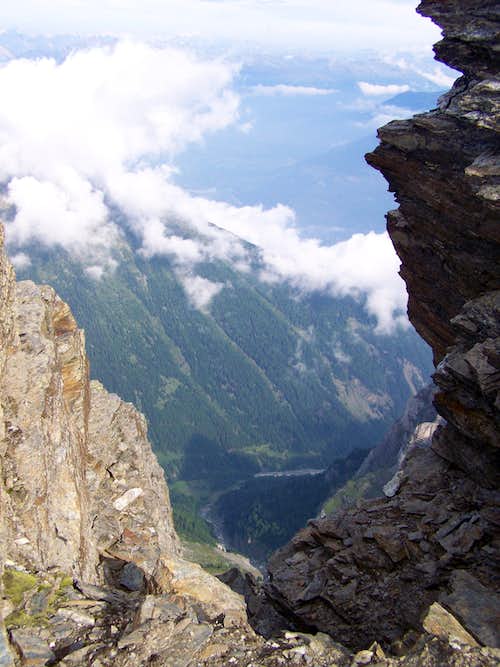 The most convenient route – and the single marked path - to Orgelspitze starts at Stallwies/Pra di Stalla (1950 m). You can drive up to Stallwies with car on a narrow but paved road. There is a place appropriate for parking a few cars just at the starting point of the tour. The ascend starts in northwest direction, on the marked trail No. 5, along a stream. The first kilometer walk is in forest, up to the altitude of 2200 m. At the altitude of 2070 the marked path No. 23 (Marteler Höhenweg) connects to out trail, while at 2223 m there is the junction of the marked path No. 23A (Schlichtbergsteig). From here the ascend continues on steep meadows. After further 2.5 km walk we reach a saddle. Near the saddle – left to it – there is a lake called Steinmanngasseloch.

After the saddle there is no elevation loss, but a plateau where a bit more than a kilometre must be done with minimal altitude gain. The peak of Orgelspitze can be seen for the first time from this plateau. From the plateau a steep ascend of less than a km and we are on the peak.

According to different sources ascend to the peak on this route is 3-4 hours, descent is 2.45 hours. My friend and me ascended in 3 hours, while we did descended in 1: 45 hours. But it meant almost constant running downwards.

Ski tour is also possible, on the same route as described above. It’s 6-10 km, and it requires approximately 5 hours. Altitude gain/loss: 1350 m. Good physical condition is needed for this tour. Best to do it in April-May.

An alternative route to Orgelspitze starts in Marteltal, 1 km southwest of Gasthouse Waldheim in Schmelz/Fonderia. The ascent starts at 1585 meter altitude, on the marked path No. 34, along Schludertal. After 1.5 km ascent we arrive to Schludermahd/M.ga di Sluder (2004 m) The Marteller Höhenweg (marked here as No. 8) crosses our path here. In altitude 2440 m we bypass the ruins of Schluderhütte. Around 2700 meter altitude we must be carefully watching the way because this is where the marked trail No. 34 goes on to the saddle Schluderscharte, but we have to leave the marked path and continue our walk to the right on a non-marked trail. After a 1 km ascend we join the marked trail No. 5that leads up to the peak of Orgelspitze.

Orgelspitze is not often climbed. Even in better weather only a few people ascent it per day. The best season to ascend is July-October. 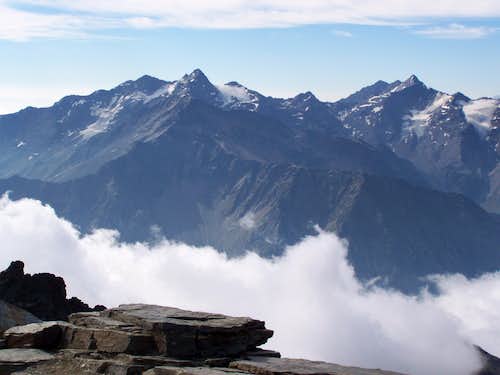 From Orgelspitze you can have an excellent view if the peak is not in clouds. Several major peaks of the mountains around can be seen very well. Just some examples:

300 meter below the peak of Orgelspitze, on the north face there is a smaller glacier. 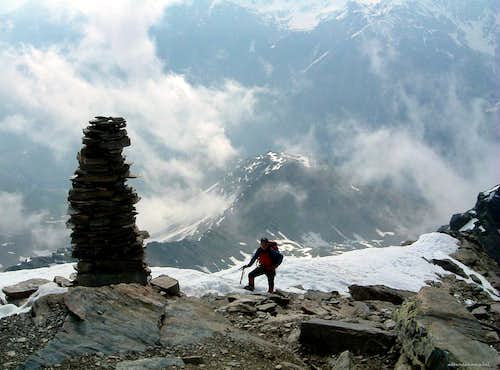 Difficulty: G1 Light Mountain Tour. No technical difficulties. Near the peak hands must be used a few times. No dangerous exposures. No special gears are needed. But good physical condition is required because of the altitude difference. Of course winter conditions are much more severe, already due to the elevation, cold and snow. But minor snow fields may be on the path even in late summer, depending on the weather. 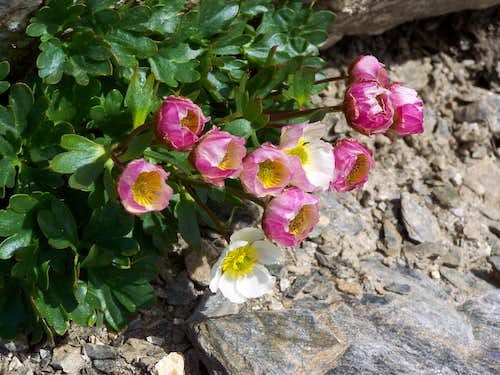 Flowers on the slopes of Orgelspitze

No special limitations, except for the rules that apply in the National Park Stilfser Joch.