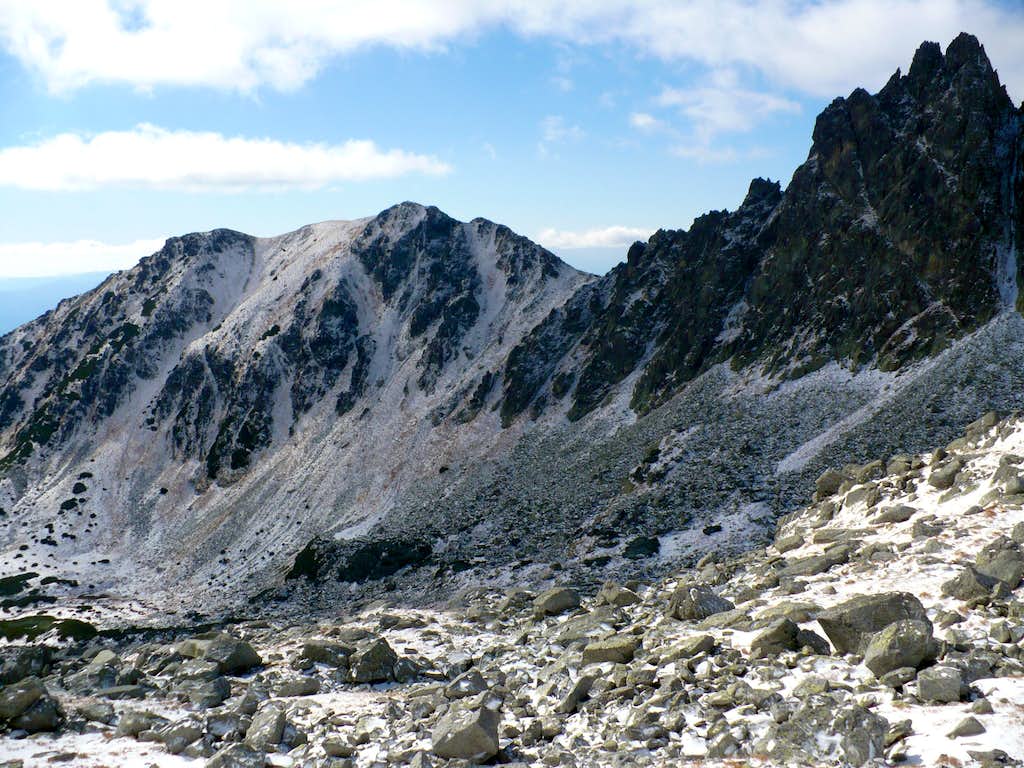 Ostrá veža (2129 m) on the right and Sedielková kopa (2061 m). The saddle between them is Sedielkový priechod (1950 m). You may see zig-zag unmarked trail from the Furkotská valley to the saddle. I went that trail up on the 13th october for summiting both peaks, but failed on Ostrá veža. Date of the photo: 14th october 2007.
« PREV NEXT »

Yes, I can see it zig-zag! I need to
study my map again. Can a person see
the ocean or any large lakes from the
summit of these mountains? Regards to
you and your climbing crew, Tomas!

Okay, I see some very large lakes in
Hungary! Where does all the water go
from the southern slopes of High Tatras?
Does it all flow into Hungary???

No ocean or sea can be seen from Tatras. Those are too far away - nearest seashore is some 500 kilometres away. There are some artificial dams, but none is very large. You pointed rightly that there are big lakes in Hungary an Austria - Balaton and Neusiedler see. The answer to your question is, that most of water from slovak Tatras flow into river Váh and, the longest slovak river and inflow of Danube, what flows further through Hungary and Romania to the Black sea. However, there is a watershed on the ridge of Tatras. The other streams flows finally into the North sea. The watershed follows the main ridge of Western Tatras, than follows part of High Tatras ridge, until Čubrina (2376 m). From there on the watershed follows part of the 12 kilometres long side ridge culminating in Kriváň. Watershed follows that ridge until Hrubý vrch (2428 m). From there on the watershed follows to the south through the ridge of Solisko and through the moraine of Štrbské pleso (1355 m) to the south until it reaches the ridge of Nízke Tatry. Waters from east parts of Tatras and from polish Tatras flows into the North sea.

On this photo we see the last valley, from which waters flow into Hungary. Solisko S-N directing ridge is behind my back, parallel to the ridge of Sedielková kopa and Ostrá veža seen on the photo. Cheers Tomas :)