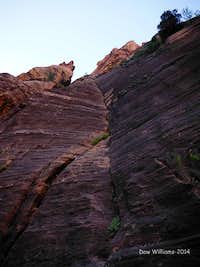 1st Pitch
Out of Wax is located on Tunnel (Cragmont) Wall between the first route ever established on the wall, Another Roadside Attraction (5.11R), and UnU (5.10). It angles left up two decent crack pitches to intersect a fixed rap on Roadside. It could use more traffic to clean up the rock, but is a worthy route as most are on Tunnel Wall. It is a good route to combine with UnU and InI (5.10) for a full days-worth of pitches. Bryan Bird established the first pitch in 2005 and finished it in 2007 with Brody Greer. 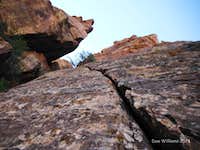 2nd Pitch
The first pitch is by far the crux and Bryan has it rated 5.10+ on his topo. After a spicy start up a short crack to the left of the main feature, follow a flaring finger crack up lessor quality rock (compared to most of the routes further east on the wall) to a finish up and right at a fixed rap on a ledge. The second pitch is quite a bit of fun, but more 5.9 than 5.10 which is what Bryan has it listed on his topo. Traverse left to an arching finger to hands splitter that is exited at a tree up the face to the right past a bolt to a fixed station on a ledge.

Park at the second to last pull out heading up to the tunnel’s west entrance. Catch a trail that starts at the right end of the stone wall. Follow it well below the tunnel windows and catch any numerous faint trails that head up to the base of the middle of Cragmont/Tunnel Wall. Out of Wax creates a striking right to left arching feature in darker rock just to the right of the start of Another Road Side Attraction which starts on the right side of the large (half wall height) beer bottle type feature/tower on the center of the wall.

1st Pitch- 125’- 5.10/ This is a cool arching finger crack feature, but has a spicy start to access the crack. Start in the short crack to the left where you have several gear options that can be placed from a pumpy stance. A #.75 pocket and/or a large nut/C4#5 up higher, before making a traverse right into the crack proper. Follow the sometimes flaring crack to its terminus and angle up and right to a fixed belay ledge.

2nd Pitch- 115’- 5.10/ This is a much easier lead. Traverse left on easy jugs to access the finger to hands splitter. Long sling your lower pieces and follow this fun splitter up until a tree blocks your wall. Traverse up and right via face climbing past a bolt to a fixed anchor ledge.

Rap the route with a 70m rope. The first pitch rap barely makes it. If your 70m rope is short, you might have to jump off it a bit.

Bryan called for a double rack to 4”, but we did not need C4#3’s or #4’s. Both cracks take mostly finger pieces. Off-set cams or nuts help on that first pitch. Plenty of slings will be helpful regarding rope drag on the second pitch.