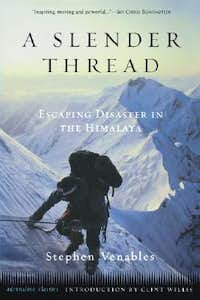 In 1988, the author pioneered a route up Everest’s biggest wall, the Kangshung Face. In doing so, he became the first Briton to scale Everest without supplemental oxygen. A few years later, in 1992, he joined another famed British mountaineer, Chris Bonnington, on an expedition to the Panch Chuli, a group of five peaks near India’s Tibet border.

In an attempt on Panch Chuli V, Venables fell 300 feet when his rappel anchor pulled. He broke both legs and found himself stranded on steep terrain at 19,000 feet. This book is his skillfully written account of the expedition, his accident, and of his successful rescue involving the efforts of his fellow climbers and Indian soldiers and helicopter pilots who risked their own lives to save him.

Between the telling of the epic, the author reflects on the question why he engages in the dangerous activity that is high altitude mountaineering, an activity he admits is “in some fundamental sense unwise” and that takes irretrievable time from his cherished family and other aspects of his life.

Himalayan Epic
Venables admits that when he left home for the Panch Chuli, his 13th Himalayan expedition, he had an unease and even a sense of doom about the whole thing. He says that “Himalayan climbing had almost become a bad habit for me. Although there is plenty of reflection in this book, it doesn’t interfere with the telling of his epic on Panch Chuli V. For me, the helicopter rescue was particularly gripping, as Venables skillfully weaves the narrative of pushing a machine and pilot skills to their absolute limits.

In my view, this is a first rate book in its genre. Not every mountaineer who has been through such an experience could write about it in such a skillful manner.