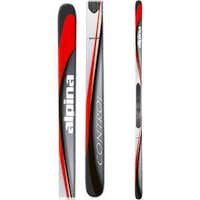 I bought my Alpina Controls 2 seasons ago and they're still one of my favorite touring skis. They're a bit wide for track with measurements of 65/53/62mm, but for those that like track and off trail touring they are a great choice. We use ours for touring and some light backcountry use. They perform quite well in powder, and better than other non-metal edged skis I have used in icy conditions. They have very good controllability, and have proven to be quite tough in touring with heavy pack loads. Running a little shorter than many touring skis, they work well in forested areas. They are built with a wood core, and have a non-stick, scuff-tough top surface. They climb well, and weighing 1600 grams, they're not a heavy ski.

I use NNN BC bindings with Alpina boots for a little more stablilty and control.

The manufacturer suggested use is touring. If you are interested in getting off the track and doing some touring without costing you a lot of money, try these skis at your local rental shop, and you may just be buying a set. They usually run under $200.00 with bindings.
Features