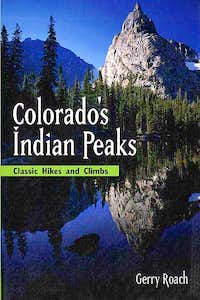 "Published by Fulcrum in 1998, this second edition of the 1989 classic continues where the first edition left off. The 6 x 9 inch, soft cover book has 208 pages, a stunning full color cover photograph of Lone Eagle Peak, 21 trailheads, 29 trails, 49 peaks and 127 routes. The reason this volume’s numbers are slightly less than the first edition’s is that the scope of the book is from the Indian Peaks Wilderness- Rocky Mountain National Park boundary in the north to Berthoud Pass in the south. In the intervening years, Gerry’s Fourteener guide appeared which covers the Fourteeners south of Berthoud Pass, and it no longer made sense to include them in this volume. However, the second edition covers more routes in the Indian Peaks Wilderness than the first edition. The second edition has 42 annotated, black & white photographs. The second edition’s big improvement was the addition of 20 annotated, black-and-white topographic maps. The guide also has a locator map for the wilderness area and a list of 93 peaks in the area in and around the Indian Peaks Wilderness."

Best to pick up a copy from Gerry's site (link above).

Yet another hit.
This is the guide to have for the Indian Peaks. It is very extensive and provides excellent descriptions of the IPW peaks.

The perfect guide for the IPW
I have had this book for several years, and it is an excellent book. Every peak that I have climbed in the IPW, I have taken this book along with me. The maps are accurate, and all the route descriptions in the book are perfect. There are also many good pictures in the book, but it is hard to beat the cover picture. I would recommend it to anyone who plans on doing some serious hiking in the IPW.