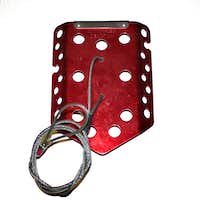 The Deadman is often the only way of belaying on snow. When placed at the correct angle and then loaded, it will bury itself deeper, spreading the load dynamically over an area of snow. Its holding power is dependent on the consistency of the snow, hard never being far better soft snow. The final plate size of the DMM Deadman has been chosen after extensive testing to optimise the balance between practicality for carrying and holding power. It has carefully designed wings which help stabilise the plate and reduce the chance of its rotating and pulling out sideways. The lightening holes not only reduce the Deadman's weight, but increases its drag coefficient in the snow and make it easier to convert into a snow shovel, by tying it to an ice axe. Available polished or anodized.

Untitled Review
Most likely the best of the breed.

Mine is 6 seasons old now and there is still no fraying of the wire so I sitll have a few seasons left in it. I have found it to be a really great tool though I may only use it once or twice a season.

It does take a pounding better than the other similar products I have used and the metal strip across the top really saved wear when pounding in deadmand in very hard snow.

Like all deadman they can be proplimatic to place if you do not get that 40* angle just right it will pop-out just like all the others of its breed. So a few pratice runs at the start of the season is a good idea.

Overall a nice piece of kit to have though they are much more popular here in NA than in Europe.