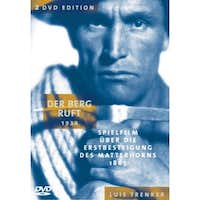 
1865: Never before has a human being set a foot on the summit of the 4.477 meter high Matterhorn. Jean Antoine Carell, an Italian mountain guide tried reaching the peak several times from Breuil in Italy, however, in vain. One day while climbing the north face he meets Edward Whymper, one of the leading British climbers. Carell saves his life. Whymper hires Carell as his guide and both of them are certain to make it to the summit together, being the first men to ascend the Matterhorn. Due to an intrigue, Whymper believes that Carell is attempting the ascent for Italy. He organizes a group of English climbers and Swiss guides, reaching the peak shortly before Carell, who is devastated when he sees Whymper on the peak. But the climbers euphoric mood changes rapidly. While descending the mountain one of the British climbers slips and falls to death, taking three others with him. Whymper survives, but is accused of saving his life by cutting the rope holding his companions. Carell, back in Breuil hears about this tragedy. He does not believe the court in Zermatt which is convinced of Whymper’s guilt. So Carell climbs the Matterhorn again and finds the rope. He proves to the court that Whymper is innocent. The rope was not cut, it ripped apart…