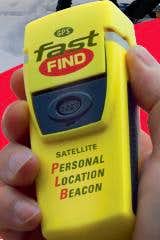 Described as the cheapest to date 406 MHz personal locator beacon, presumably to be sold under $300. The 406 MHz uplink to COSPAS / SARSAT satellite network is supplemented by transmittal on the former SARSAT band, 121.5 MHz. As of February 2009, the 121.5 MHz is no longer in use by the satellites. The makers of FastFind expect that the rescuers will use 121.5 MHz signal to home in on the beacon location once they are in the "near vicinity".

The use of 121.5 MHz band has not yet been FCC approved when this review has been posted, and therefore the PLBs can not be sold / registered in the US. However regulatory approval is expected in spring 2009.