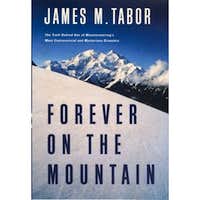 This work is an effort to explain the who, what and why of one of the greatest tragedies in North American mountaineering history. In 1967, 24-year old Joe Wilcox organized a 9-man team to climb Denali, but ended up being the leader of a 12-man team. A team of 3 led by one Howard Snyder was forced by park regulations to either team with Wilcox or not climb. It was evident from the beginning that two teams were not a match. The climb was made via the classic Muldrow Glacier – Karstens Ridge route. Only 3 of the 12 members summited. Most of Wilcox’s team was caught in a vicious storm and 7 of them perished. Snyder wrote his version of events in Hall of the Mountain King a few years after the event. He pointed a culpable finger at Wilcox. A few years after Snyder’s book, Wilcox wrote, in White Winds, his own detailed account of events partly in rebuttal to Snyder’s account.

Tabor’s volume is the result of a lengthy investigation into what happened in July 1976, drawing on previously untapped sources: personal interviews with the survivors and those involved in the aftermath, unpublished diaries and letters and government documents. Some of the “mysterious and controversial” questions that Tabor attempts to answer include why 10 days passed with no all-out rescue effort while more than half the expedition was trapped and dying below the summit during one of the fiercest storms in Denali history; and why there was never a formal official investigation into the catastrophe. Tabor concludes that assigning blame for the tragedy to Wilcox is unjustified and that the magnitude of the storm that trapped the members who perished accounts for much more than supposed deficiencies in Wilcox’s leadership.

Compelling Work on 1967 Denali Tragedy
I enjoyed this book much more than either Snyder’s account, In the Hall of the Mountain King, or Wilcox’s account, White Winds. Tabor is a much better writer and I did not sense that he had an axe to grind about what happened, although the National Park Service and Denali Park Superintendent at that time do not come off in a good light. For example, as to the question why an all-out rescue effort was not launched during the first 10 days that Wilcox’s team members were trapped on the mountain (with the exception of a rescue effort initiated by another team that was already on the mountain), Tabor throws out that perhaps one contributing factor was that neither the head of the NPS nor the then Denali park ranger superintendent had any mountaineering experience at all.

Tabor’s investigative work is impressive ranging from his interviews with the survivors, including Wilcox and Snyder, to securing of government documents through Freedom of Information requests, to his consultation with experts such as meteorologists and experts in forensics. Particularly compelling was the exhaustive analyses performed by meteorologists retained by Tabor on all the available weather data for Denali for the relevant time period, including data that reflected the extreme severity of the storms that trapped the climbers.

Tabor’s analysis of events is convincing that Wilcox should not be blamed for what happened although some, like mountaineering icon Brad Washburn, assigned blame in just that way.

well done
This book was both well researched and well written and examines the events of the expedition from an outsiders perspective. It brought to light how, sadly, politics and hypocrisy could contribute to the death of seven young climbers.