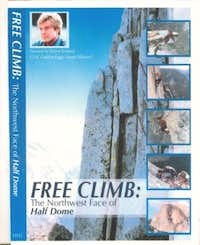 Half Dome Northwest Face, Regular Route
This is the first true Grade VI climb in Yosemite.

The most popular big wall route on one of Yosemite's most famous features - the vertical face that makes this Dome a 'half' rather than a whole. A great route by the legendary Royal Robbins that opened a new chapter in American rock climbing. Suffers from crowding and trashing now. A common target for speed ascents, but the average team will still spend a night or two on the wall.

All of the major walls and formations in Yosemite Valley had been climbed by the mid 1950s with the exception of the Northwest Face of Half Dome and El Capitan.El Capitan, with its intimidating 3000 foot face, was obviously out of the question for at least a few years, leaving Half Dome, with a much more manageable 2000 foot face, as the logical next goal.

The first attempt to climb it was made in 1954 by Dick Long, Jim Wilson, and George Mandatory. However, they only managed to climb 175 before retreating. A more serious attempt to find passage up this cliff was made in 1955 by Jerry Gallwas, Don Wilson, Royal Robins and Warren Harding. After climbing a mere 500 feet over five days, this party, too, retreated.

Gallwas and Robbins, armed with new chrome-molybdenum pitons made by Gallwas, recruited Mike Sherrick and set off on June 24, 1957, determined this time to finish the route. Over a period of five days, they encountered repeated obstacles and, using ingenuity and tenacity, they surmounted all these difficulties. Five days after they had left the ground, they stood at the summit. Warren Harding had hiked up the backside of Half Dome via the hikers 'trail for the occasion. He had been planning, along with Mark Powell and Bill 'Dolt' Feuerer,to give the route another attempt, but had been beat to it by the successful team. Nevertheless, Harding offered the triumphant team a warm congratulations.

In 1976 Art Higbee and Jim Erickson took the final aid out of the climb on pitch 23 near the top in this film.

Classic
This film is a little goofy since its an old one, but made fairly well. I enjoyed seeing the old style of gear and how they progressed up the rock. It was a short film, but entertaining and fun to watch!