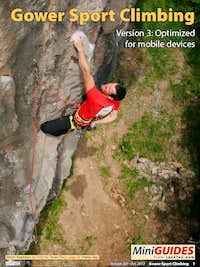 According to Rockfax "Gower is the elegant peninsular that projects from centre the South Wales coast. Long known for its fine traditional crags and sandy beaches that take turns to define its coastline, Gower is also home to a surprising number of well-equipped sport crags. Encompassing the grade range from 4s to 8s, and the style range from technical slabs to overhanging jug-hauls, and with new areas being developed still, it's time the word got out".

The third edition of the MiniGuide is now available and updateds include three additional Rhossili venues: Shipwreck Cove East Face, Retribution Wall, and Wedge Wall. Recently climbed projects have all been included. IF you bought previous editions then they can be updated for free, otherwise the download costs £5.

Great Guide
As usual Rockfax have published a great little guide that is well presented, easy to use and covers a range of route types that will appeal to climbers of all different abilities. The difference with this guide however is that it comes in electronic form optimized for mobile devices. This has many advantages, especially when you consider the size of Rockfax's recent publications such as 'North Wales Climbs' (not that I criticize that book too much, it's an excellent book). It also has the added advantage of being easy to update, which Rockfax do indeed do. Given that the download only costs £5, this makes it excellent value too!