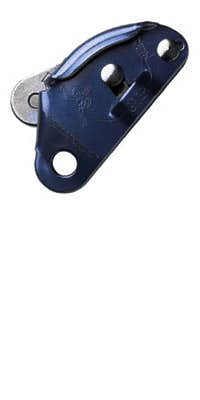 This popular belay device is designed for top-roping, gym-climbing and sport-climbing. The Grigri can improve safety in climbing the way a seat-belt does in a car because it jams when tension comes on the rope.

To belay a climber, you slide the rope smoothly through the device. If the climber falls, the sudden pull makes the cam pivot, which presses on the rope and stops it running. For lowering a team-mate off a climb using a Grigri, you operate the handle so as to unjam the rope and you control the running of the rope, and thus the climber's descent, by varying your grip on the free end of the rope. One hand controls the rope to regulate speed and braking, while other hand holds brake-lever open.

Although it gives greater safety, the Grigri is not a substitute for vigilance on the part of the belayer, who must remain attentive to the climber at all times.

Untitled Review
I don't like this kind of mechanism, it holds the climber well but you tend to press the left plate; this manoeuvring is dangerous. Also it's slow when you have to loosen rope fast. Grigri get hot when rapel is longer than 50 m.

Untitled Review
NIce toy but don't use this one for trad climbing or alpinism. Practice with it plenty before you use it. When belaying the leader, learn to squeeze down on the device and feed rope to prevent yourself from shortroping them. Very awkward to belay from above so use this one indoors or at the sport crag only. If you and your partner like to work routes and/or hangdog - the Grigri is for you.

Untitled Review
Perfect for doing harder top-rope routes where climber is going to hang or rest a lot. Not as good for trad or sport because you can't feed to the leader fast enough. It's too heavy for the mountains.

Untitled Review
Great Product. Only possible problem is relying too heavily on this device. I have noticed that climbers seem to depend on this device to do the belayer's work for them. A great tool as long as you use it like any other belay device and let the braking system catch you when you mess up. Also, make sure that the belayer knows how to lower you with this device before you are up on the wall.

Untitled Review
A wonderful device for top rope belay or bringing your follower(s) up after leading. It makes a poor belay for trad or sport leads as it is hard to play out slack quickly. It also makes a poor rappel device. Perhaps we all wish that it would accept lines smaller than 10mm.......Despite all of that, it will save a Faithful Belay Slave alot of effort in top-rope situation.!!!!

Untitled Review
The only time I use the grigri is on top rope belays. To hard to belay a leader. What I like: easy to use. Autolock on a fall. Wide variety of uses. What I don't like: This device makes you lazy and can lead to bad belaying technique. Not easy to lower smoothly. In all its a good device, but for the weight, I would rather carry an extra ATC.

Untitled Review
I would not use this for anything but toproping. Would be good for belaying a second, but it is too heavy and not near as versitile as a reverso.

Untitled Review
Great for top-roping. But in skilled hands also an ace with leading (sport). One has to just learn to either feed the rope so that the cam doesn't activate (hard). Or squeeze on the sides of GriGri (where the cam is) in order to semi lock it in place and allowing you to give slack quickly (easier), and still locking the thing when your leader falls.

A bit heavy though, but not a real problem with sport climbing, as a rope and some quickdraws don't weight a lot compared to a trad rack.

Untitled Review
I was in the gym when someone threaded the GriGri wrong. Their climber took a ground fall in the leaders cave ~ 20feet. Not hurt. I guess that person couldn't read pictures. Anyhow prefer not to use it , because the lowering mechanism does'nt feel natural.

Untitled Review
The Cadillac of belay tools, but that also means its heavy.

This is a very secure way to belay giving any belayer / climber that extra level of confindence that a good catch is ready and waiting.

It is possible to drop a climber though! Not fool proof, any belayer still needs to use proper belay technique. The belayer should also pay attention to controlling the lowering speed by using the lowering lever not the lock off hand. I have heard of a belayer who burned her hand because she pulled to lever all the way back and lost control with her lock off hand and forgot to let go of the lever.

You can also belay a leader with this device but it takes practice and close attention.

Untitled Review
I really enjoy using the grigri when toproping and aid climbing. It keeps my hands from getting cramped while belaying for long periods.

The action is very smooth with lower with weight on the rope and stops at a moments notice.

I also find it easy to use when wearing gloves in cold weather.

An ATC still works best for an everyday belay device.

Untitled Review
This is a fancy belay/rappel device that has no place in my pack, but i carry it in my gym bag. The action is smooth, but i don't like feeling removed from the friction. This is more like a toy than a tool and even at the gym, i often use my ATC.

Bottom line, this thing is cool, great for gym and probably sport/top-rope climbs, but when i'm in the mountains, this is holding down papers on my desk.

Untitled Review
Like communism, the grigri is a wonderful idea on paper which is too often taken to be the best solution to the wrong problem. In the hands of a competent belayer, a grigri functions nicely. It catches falls smoothly and compensates for a less-than-totally vigallant belayer. In the hands of a novice, it is an invitation to the nearest emergency room.

At least one climbing gym I've been to requires all climbers to use grigris (supplied by the gym and permanently attached to each rope set-up). I have been dropped while lowering at this gym twice, both times by inexperienced but well-trained and very attentive partners. The problem is this: to lower someone, you apply variable pressure on the black, fold-out lever. To stop them, you simply let go of the lever. However, this is not human nature! Both times I was dropped, I started descending a little faster than my belayer was comfortable with, so they panicked and pulled harder on the lever. This is human instinct and exactly incorrect for the grigri! I dropped like a stone 10-20 feet both times (fortunately, not seriously injured in either case).

The grigri is a specialty peice of climbing gear for sport routes and experienced climbers. As such it gets four or five stars. Unfortunately, clever marketing has convinced people that this is the best option under all circumstances. Belay should be simple and intuitive. The grigri is neither.

Untitled Review
The Gri Gri needs practice, otherwise accidental misuse is not impossible. Important to know that Petzt sell the GriGri for belay, not for rappel, you can use it for rapel, but not longer as 60 meters, it becomes very hot and you might damage your rope.

Not so complicate...
Not so complicate to use. Only a bit of practice is necessary.
Once you know that in any emergency the only thing to do is to take the hands off the device. Then the GriGri automatically blocks the rope. Not one of the most complicate things we have to learn to become a climber.
Maybe more difficult is to properly feed the leader. It requires some experience and good timing.

Has its place, but....
Great on top rope routes where your climber will hang a lot, but I think too specialized, bulky and heavy for general use as a belay device. It takes some practice to use as lowering device so that your instinct becomes to let go of the lever if you need to halt the lowering.

I wouldn't use it as a rappel device.

As an ascending device, it feels nice and secure, but again why burden your pack with something as heavy when a Ropeman will do just fine?

Has its place, but not in climbing
Harsh works perhaps. I would never take this clunky heavy thing on a climb.
Perhaps someone can argue it is good in the climbing gym, but I do not agree. What you use in the gym should be the some gear used on rock. There is also a lot of room for error in this products use as pointed out in other reviews so I won’t repeat it here. Mine says in the extra gear bag.

Pretty good
This is great when you take new people out climbing to teach them how to belay. Not so great if you are leading, you can't feed the rope through very fast.

good
I rarely use it for belaying (although it works great) but mainly for anchoring ropes while keeping them adjustable, the auto-locking is also great for tightening ropes

decent
A little awkward at first, this device is good for when I am taking someone who doesn't climb a lot to belay toprope. It is heavy, but it is great for sport.