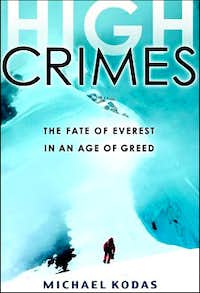 Every armchair mountaineer and those who have climbed mountains far lower than Everest has read or heard about Everest's base camp and climbing problems. In 2004, journalist Michael Kodas attempted to climb Everest himself and reported back on a wide variety of what is sometimes called "the dark underside of Everest: people who would do anything for a quick buck, or a guarantee of reaching the top."

Interspersed with details of base camp theft, prostitution and extortion, Kodas spends a great deal of the book talking about the unruly acts of his team and the dictatorial behavior of his team leader. He goes home defeated.
But eventually he returns to investigate the story of a climber who was left by his private unlicensed guide to die on Everest.

Overall, a great read!
If you weren't already disillusioned about the Everest climbing scene, this book will truly do it! A bit heavy-handed on some of the details and I felt like blaming Kodas himself for choosing his team leader in the manner he did but also I ended up admiring him for following through on the investigation of the abandoned climber. He went to great lengths to check out the guide and his background.

It's a negative book but it's probably close to the truth and that's sad. I'd rather cling to the mythological Everest, I guess.