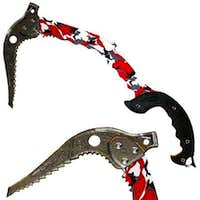 An ice tool is a specialized elaboration of the modern ice axe (and often described broadly as an ice axe itself), used in the more difficult configurations of ice climbing.

In contrast to the typical mountain axe used for hours or days a party is traveling with need of them, ice tools are used two to a person for the duration of a pitch.

In climbing vertical ice, two tools are needed in order for the climber (supported by cramponed feet) to use each tool, in turn, to maintain balance with the body's center of mass nearly straight above the toes, while repositioning the other tool to a higher level, before raising the body weight with the legs and thereby, setting the stage for repeating the process.

The physical designs of ice tools differ more widely than those of other ice axes.
Pick variations: Most ice-tool picks are flat, with a (shaftward) "drooping" direction and a serrated lower edge, but some of these are straight or concave on their upper edges, instead of convex as other ice axes are. With the same kind of design, picks may vary in degree, as to number of teeth, depth of teeth, or thickness, and some are field replaceable, to deal with point damage or to accommodate more than one pick design on the same tool. There are also ice tools with round tubular-nosed, instead of flat, picks.
Adze-end variations: As with non-ice-tool adzes, those of ice tools vary in several aspects; other ice tools have a hammer head in place of the adze, or are modular, permitting switching styles of adze or hammer, and/or between adze and hammer.
Shaft variations: Shafts may be straight, as with shafts of non-ice-tool axes, or have one or two bends or curved sections. Ice tools generally range from 40 to 60 cm in length, with 50 centimetre being by far the most common length.
Spike variations: Non-ice-tool spikes are generally flat and symmetrical, with straight or convex edges meeting at a point. Ice-tool spikes vary widely, including also asymmetrical flat shapes with teeth on one side or two points of different lengths, conical or oval tubular ends, or slightly hooked ends.