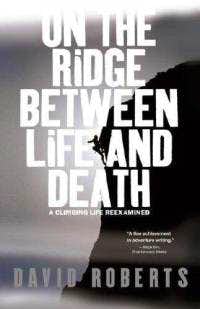 By the time David Roberts turned twenty-two, he had been involved in three fatal mountain climbing accidents and had himself escaped death by the sheerest of luck.

At age eighteen, Roberts witnessed the death of his first climbing partner in Boulder, Colorado. A few years later, he was the first on the scene of a fatal accident on Mount Washington, New Hampshire. Months afterward, while pioneering a new route in Alaska with the Harvard Mountaineering Club, Roberts watched as his climbing partner and friend fell wordlessly 4,000 feet to a glacier below.

Despite these tragedies, Roberts insists that the greatest pleasures in his life have come in the mountains. Several of his challenging routes in Alaska have never been climbed again in the nearly forty years since those first ascents. Roberts continues to climb today, and like all climbers, he still grapples with the cost-benefit calculus of his sport. In a well-known essay that he wrote twenty-five years ago, "Moments of Doubt," Roberts insisted that the benefits of climbing were "worth it." More recently, however, he has gone back to interview relatives and friends of some of his deceased climbing partners. He discovered that even decades later, the wounds had failed to heal, the terrible losses were still acutely felt. And so in this book he comes to a different conclusion about climbing, one that is sure to stir controversy in mountaineering circles and among adventurers generally.

Anyone who has ever wondered why mountaineers take the risks that they do will be moved and enlightened by On the Ridge Between Life and Death, as will anyone who appreciates vivid, dramatic storytelling and an unflinchingly honest self-examination of a lifetime spent pursuing a dangerous pastime.

"Nobody alive writes better about mountaineering and its peculiar adherents than David Roberts, my mentor and friend of thirty-some years, and this is Professor Roberts's magnum opus. Told with wrenching candor, On the Ridge Between Life and Death may disturb you, or even make you angry, but you will not be able to put it aside."

-- Jon Krakauer, author of Under the Banner of Heaven: A Story of Violent Faith and Into Thin Air: A Personal Account of the Mount Everest Disaster

"David Roberts has crafted a work of staggering introspection, taking responsibility for his passion of bleeding-edge mountaineering. His probing honesty and penitent perspective have caused me to reevaluate the risk-reward balance of my own passion."

-- Aron Ralston, author of Between a Rock and a Hard Place

"On the Ridge Between Life and Death presents the challenges, risks, and rewards of climbing in an honest and balanced light. In a brutally honest voice, Roberts seeks to answer the question of why we choose dangerous adventures."

"The most extraordinary climbing memoir I have read. The eternally damnable question -- why climb, and is it worth the risk? -- is at the forefront of Roberts's personal investigation. His answers may trouble, and inform, all climbers."

-- Greg Child, author of Over the Edge: The True Story of Four American Climbers' Kidnap and Escape in the Mountains of Central Asia


About the Author (From the Back Flap)

Awesome Book
This book is a great read. I couldn't put it down. David Roberts has some amazing stories to tell about mountaineering and his life. I definitely recommend this read to anyone that is into climbing.