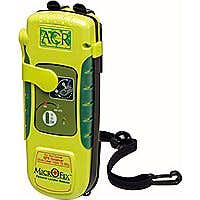 PLB's are part of the NOAA (National Oceanic and Atmospheric Administration) SARSAT (Search And Rescue Satellite-aided Tracking) system. When an individual (or group) is in distress, activating a PLB results in a 406MHz signal being transmitted. The distress signal is received by the SARSAT system which uses NOAA satellites in low-earth and geostationary orbits to detect and locate the source of the signal.

Initially, the geostationary satellites detect the signal and relay it to a network of ground stations and then ultimately to the U.S. Mission Control Center (USMCC) in Suitland, Maryland. The actual location of the transmitting PLB is then determined using doppler technology from the low-earth satellites which can take up to 45 minutes depending on the location of the PLB transmitter compared with the closest low-earth satellite.

Encoded in the transmitted signal is a serial number which is used to determine the registered owner of the PLB device. Some models of PLB's include and/or allow a GPS (Global Positioning System) module. The GPS module is able to determine the PLB location by acquiring information from GPS satellites. Once the position is acquired using GPS satellites, the position coordinates are transmitted as part of the PLB signal thereby providing position information within minutes instead of the potential delay of 45 minutes. With the GPS information included in the transmission, the beacons location can be determined within feet instead of miles.


The USMCC provides the location information to the local Search and Rescue authorities. In addition to the 406MHz transmitted signal used by the SARSAT satellites, the PLB devices also transmit a 121.5MHz homing signal that is used by Search and Rescue teams to locate the person in distress once they get close to the location provided by the SARSAT system.