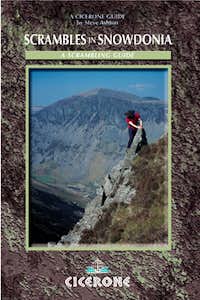 All the described routes lie within the northern half of the Snowdonia National Park, where the most rugged mountains are found. Good scrambling in the southern half is scarce, the rock here being typically loose or vegetated. Northern Snowdonia naturally divides into four regions. From north to south these are the Carneddau, the Glyders, the Snowdon group and Eifionydd. The best scrambles will be found in the Glyders, with the large majority concentrated on Tryfan, Glyder Fach and Glyder Fawr. The Snowdon group also boasts many excellent routes, whereas the Carneddau and the Eifionydd regions provide only a handful.

The choice of routes is, by necessity and design, a selective one. All the best scrambles are included, though for the sake of a broader coverage some mediocre ones in the Glyders and Snowdon group have been omitted in favour of even poorer ones in the Carneddau and Eifionydd. The guide contains over sixty routes, and the range of difficulty extends from scrambly walks to the boundaries of proper rock climbing. Average fitness and a head for heights will suffice at one end of the scale, whereas nothing short of mountaineer's skill and daring will do at the other. Some routes fit neither category: scrambling over loose rock and up dripping, vegetated gullies seems to require a special cunning, for which neither hill walking nor rock climbing provides adequate preparation.

Superb book
This book could probably be regarded as the granddaddy of British scrambling guidebooks. First published in 1985 (I think) it is the originator of the British scrambling grading system. It is the comprehensive guide to scrambles in north Wales, covering (almost) every single range in the area. Its mainly covers the Snowdon, Carneddau and Glyder areas, however there are also detailed descriptions of some of the outlying areas too, notably Cadair Idris and the Eifioydd. The writing is clear and easy to understand, and most routes are illustrated at the very least by a simple map. Photographs are provided for the most popular routes, however they are all black and white and could do with a bit of an update. However this is only a minor issue and does nothing to detract form the usefulness of the book.

So if you are looking for a really good guide to Snowdonia’s scrambling then buy this book.