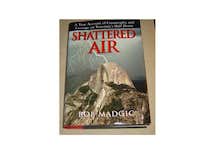 This is a gripping account of lightning’s awesome forces wreaking deadly havoc on a group of hikers who made a fateful decision based on lack of appreciation for the mountain thunderstorm. As the author warns “Every thunderstorm demands respect.”

Late in the day of July 27, 1985, five hikers decided to climb Yosemite’s Half Dome even as bad weather threatened. By end of that night, two of the hikers would be dead from a lightning strike and three seriously wounded. The author has meticulously pieced together the sequence of events as two major lightning strikes hit the victims. He provides a tight, detailed account of the efforts of first responders, rescue personnel and finally, in the early hours of the following day, a harrowing helicopter rescue. This is an account of recklessness, tragedy and courage, set against the backdrop of one of nature’s most deadly phenomenon.

Worth Reading Twice
I liked this book so much I have read it twice and have loaned it to others who uniformly said it was a great read. Talk about disrespect for Mother Nature! It may be harsh, but these victims asked for it and then they got it. One of the first EMT responders recognized the victims as individuals who had offended her by their boorish behavior when she met them down below before the start of their climb. In fact, the EMT’s brother had warmed the five not to attempt Half Dome with a storm in the offing. The response of one of the hikers was "Someone's gotta do it." Now this EMT was in charge of saving the survivors’ lives. Irony of ironies.

The chopper rescue is nail-biting, as such rescues in the dark are likely to be.

The book also provides a very interesting post-account narrative of the recovery of the injured parties both physically and emotionally.

Good read also!
This is the book I was inspired to look for after reading about the same incident in "Off the Wall: Death in Yosemite". I thought some of the background story for the main characters was a bit drawn out and the author never quite convinced me of the victims sincere attraction to Half Dome BUT everything else about this hellish event is 'read until you finish' caliber.

I was especially impressed with the description of the first aid assistance given to the victims by the EMT for far longer than she had expected. She really took control of the situation, directing other hikers to help and even enlisting one of the lesser injured victims to assist. It's a great example of an unexpected crisis situation handled perfectly with minimal resources.

You'll probably learn more about Half Dome, first aid and sheer luck by reading this and you'll eventually figure out that lightning is the real star of this book.