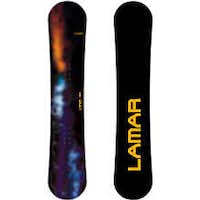 Snowboards. What can I say. Greatest Invention Ever. Skiing is great, and no offense intended, but snowboarding feels more natural. Water skiing vs Surfing/Wakeboarding. Rollerblading vs Skateboarding. You get the picture.

It is my opinion that nothing, and I mean nothing, is more fun than snowboarding.

The most popular board. Accounting for half of all sales, this type of board is a good all-mountain, park and halfpipe. Designed to float well in powder snow. You can enjoy carving, catching air, and basically all riding aspects with this type of Snowboard.

They have a directional shape and are thus are meant to be ridden primarily in one direction. Having a directional shape means that the Snowboard's tip is different from its tail. The tail is generally more narrow, shorter, and flatter than the tip of the board. With this, the stance on the board is usually offset toward the tail. Still, freeride boards can be ridden Fakie, despite their directional shape.

They are usually fairly soft and maneuverable enough for beginners, but stiff enough to hold a fast turn in hard snow. This type of Snowboard bridges the gap between Freestyle and Alpine carving. However, it isn't as stable as a carving board and it isn't as agile as a freestyle board.

Wider, more stable, and more forgiving to ride. Also, it is shorter, lighter and softer in flex, which makes it easier to turn. These characteristics make a freestyle board very responsive to the rider. Consequently, it is the best choice for the beginner.

These boards are built mainly for performing tricks in terrain parks and halfpipes. They have limited edge grip and stability, and are not good for carving or riding fast.

Most Freestyle Snowboards are either twin tip boards or directional-twin. Twin tip boards have a centered stance with a tip and tail that are exact copies of each other, symmetrical in shape. Both ends of the board have a shovel, making it easy for beginners to ride both forward and backward.

Directional-twin Snowboards are similar to the regular twin tip Snowboard, the difference being the tail is stiffer than the nose.