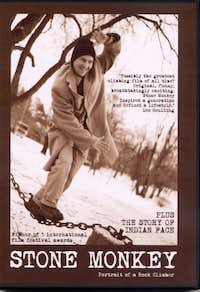 20 years after Stone Monkey was made, it is still widely regarded as one of the best climbing films ever. Johnny Dawes is one of the most exciting climbers ever to emerge onto the British scene - a Nureyev of the rock, dynamic and balletic. In the 1980s when climbing standards were leaping forward, Johnny stood out for his understanding of the rock and his unique approach. This award-winning film traces Johnny's boyhood influences and films him on his gritstone masterpieces and on the spectacular Quarryman groove in North Wales. Winner of 5 international film festival awards. (25 mins)

ALSO ON the DVD: is a compelling 30 minute documentary about of Britain's hardest adventure climb, the Indian Face (E9, 6c). This spectacular line on Clogwyn Du'r Arddu is as controversial as it is deadly. The best climbers of the 80s attempted it, but it was Johnny Dawes who finally topped out in 1986. We unfold the story using never-before-released footage of Johnny Dawes repeating the crux section of Indian Face during the first ascent of West Indian Face in 1988. The saga of the original climb is narrated by Jim Perrin, with contributions from Joe Brown, John Redhead, Nick Dixon and Johnny himself .

The Great Wall saga and the unfinished story of the Indian Face is one of the most hallowed tales in British climbing.

Cool film
I enjoyed this, even though its a little older, the climbing is superb. I really enjoy watching trad videos that blow your mind, and this is one of them. Some on the sections in the film and a little cheesy, but its worth the watch over all. Its also interesting to see Johnny Dawes attitude now about climbing and his perspective. Interesting to say the least.