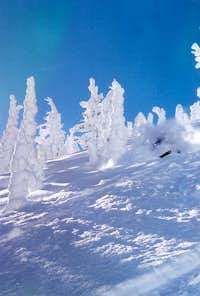 I have decided not to include pictures of each individual boot available on the market today, as the file would be very dense. Instead I have included links to jump to individual manufacturers pages where you can get a visual feast of new colors and features. May all your turns be deep

Telemark ski boots have seen an amazing evolution that has been primarily responsible for the amazing surge in telemark skiers, both on area, and off piste. The number of skiers on my local hill that are telemarking now is in the order of 20-25 percent. I do not think it a stretch to say that number would be miniscule if leather boots were still the norm. The fit, comfort, performance, and availability of modern telemark boots have combined to entice countless alpine skiers into learning how to do the super cool looking modern tele turn.

Most of the original telemark ski boots were modified leather alpine ski boots. Owners took these double boot beauties to their local cobbler, and had them put on a softer [often heavy leather, or thin vibram] sole, that would protrude in a duckbill from the toe. Three holes were drilled or pressed into the duckbill to allow it to fit in and align with a 3 pin touring binding. These boots were much stiffer than the cross country ski shoes that were common for touring, and allowed much better control of the ski on descent. This allowed the enthusiast to also begin using bigger skis with metal edges, which made steeper terrain more accesible.

Since the joy of the telemark turn is progressive, by that I mean the better you become the more fun you have doing it, the need for improved equipment has driven manufacturers to innovations that have made the modern tele boot a luxurious powerhouse, fully capable of driving new shaped skis. With more and more people trying telemark skiing, the need for specialized boots has further forced boot makers to cater to differing skier needs.

The true seminal innovation in boot design happened in 1992 when Scarpa created the Terminator, this boot became a must have for the agressive tele skier, with its all plastic design, it was capable of turning alpine skis with a three pin binding. With this boot, tele skiers were able to ski the tougher runs on area, and in less than desirable conditions on backcountry tours.

Continued advancements saw the addition of more buckles, and flexible bellows at the toe which allowed the sole of a plastic boot to flex without buckling the outer shell. This innovation solved many of the toe pinch issues that made telemark an uncomfortable agressive turn. The introduction of variable hardeness shell plastic, power straps, and thermo fit liners is allowing performance similar to alpine boots in their ability to drive the biggest of skis.

Modern telemark boots have become specialized to the point that a person thinking of buying new [or used] boots needs to determine what type of skiing they plan on doing the most. If most of your skiing will be backcountry tours, with gentle slopes of powder to farm, the makers have your boot. If you plan on doing hairball steep descents on big mountains, or crashing gates on the Telemark Workd Cup, they also make a boot for you. If however you are like most of us, somewhere in the middle, then there are many choices.

The categories are further delineated by gender, so the ladies can have the same performance choices, with an anatomicaly corrected fit specific to a womans leg and foot. There are now even child, and junior specific models. Price can also be a factor in choosing new boots with the high performance models priced over $600.00, while softer touring models are more reasonably priced in the $350.00 range.

Of equal if not more importance is the fit of the boot, and this is where individual manufacturers differ, for example Garmont boots tend to fit a wide foot easier, where a Scarpa, or a Crispi will better fit a narrower foot. So you really need to try on the boot that you are considering and give it a good flex test [with a ski on] to find if the boot will work for you. That said, with a thermo fit liner, which most boots now have, and a good boot fitter, you should be able to find a boot that is slipper comfortable, and a good match for your type of skiing.

There are some special considerations for buying used boots, or boots "on line". They would include on-line research of the type of boots that best fit your skiing style, and armed with that knowlege seek out a store that sells that boot. You can also rely on the expertise of store personel [if they are skiers] to help you determine the correct boot. Try it on, walk in it, and flex it to make sure the you are getting the correct shell size. Remember that you will likely have to use the oven, and expertise of store personel to flow or re-flow the liners to you foot. If you walk into the store with a brand new [to you] ski boot that you did not buy there, you may be asked to pay a fee to fit that boot.

One more thing about used or on-line [these were on a great sale] tele boots, resist the temptation to buy a boot that does not fit your style and ability, a Scarpa T1 Race will punish a beginner, and conversely an advanced intermediate tele skier looking to advance his skills on area will likely not be satisfied with a 3 year old pair of Scarpa T4 touring boots.

Maybe a story about this would be in order. My backcountry ski partner found a great deal on a Garmont Squadra on line. he bought the boot not realizing it was the stiffest tele boot ever made, and he immediatly started breaking bindings left and right [literally]. A broken binding in the backcountry is a horrible thing, and something that duct tape and bailing wire are hard pressed to fix. So no matter how great the price, this boot was a complete waste of money for him, because a full race boot was not a good style fit for a skin up-ski down type of skier.

The major makers of telemark boots are:

Garmont, they make 8 models including a childs boot. They also have gender specific models in 4 categories of performance.

Crispi has a more spartan line up of performance boots, but a very loyal following.

Scarpa has 8 models to choose from in gender specific performance categories.

Andrew shoes has line up of full leather telemark boots for those who are keeping it real. They also have a leather lower and plastic upper hybrid boot, for the purist who wants performance too.

The future of telemark skiing is in flux, the manufacturers seem to be trending toward a melding of tele, and randonee. Scarpa has developed a boot that in combination with a Rotafella binding will no longer require a duck bill toe. The boot will also be Dynafit compatible, so one boot for tele, and randonee skis! This boot/binding system is touted as being a step in binding with very strong performance charachteristics, so it sounds like it is ski area focused. They however have designed a free pivot system that releases tension on the springs and allows for near randonee like performance on skin tracks. So look for big changes in tele equipment in 2008, whether the public accepts these changes is another story. Keep it Real