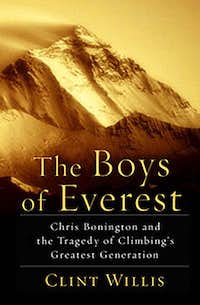 The subtitle of this book is "Chris Bonington and the Tragedy of Climbing's Greatest Generation" and the underlying theme is the tragic loss of some of the finest climbers of the 1950s to 1980s. In this book, Clint Willis looks at parts of the life of British climber Chris Bonington and his contemporaries, men he calls, “climbing’s greatest generation.” Most of these young men had little money and returned to climbing between regular jobs, felt so strongly compelled to climb that they could not lead regular lives with lovers, wives and children. They returned to climb with Bonington over and over and to claim many first ascents and to claim others on their own turning the climbing world on its axis.

Willis' book is based on extensive interviews with surviving climbers and other individuals as well as five decades of journals, films, photographs, expedition accounts, and letters. It details several momentous successful and unsuccessful attempts to climb peaks such as K2 as well as the change from traditional siege style expeditions to small, alpine style expeditions. Some of the climbers highlighted in the book are: Martin Boysen, Tut Braithwaite, Joe Brown, Charles Clarke, Jim Curran, Hammish MacInnes, Dick Renshaw, Al Rouse, Doug Scott, Don Whillans, Peter Boardman, and Joe Tasker. Many spouses and friends are also mentioned in this book.

What a let-down......
I truly struggled to read this tome for a number of reasons.

First of all, it is staggering in length at over 500 pages in paperback. Second, the writing is so jumpy. In one paragraph you are reading about the summit party's attempt to get to the top of a major mountain and then in the next paragraph they are back at base camp packing up and leaving with barely a mention of their success. Willis does this constantly in the book; building up to an expedition's arrival at the base of a mountain and then almost no details about the mountain experience itself.

Worst of all, in my opinion, especially if the reader is new to expedition literature, is Willis' repeated lapses into the thought processes of the climber. These insights are probably supposed to be revealing but they come very abruptly sometimes into an otherwise factual sequence and if you are new to climbing books they are probably worse than just odd.

Third, the chronology and importance paid to events in this book is confusing. Sometimes big climbs get proper attention but so can smaller, relatively unimportant climbs.

I truly grew to dislike Clint Willis' writing style. For the most part he seemed to use short, "feature-less" sentences as I call them or factual phrases. Very little emotion, very little description yet here he was, talking abut some of the biggest legends in the world: Everest, K2, Chris Bonington, and Joe Tasker. And then once in awhile, he would throw in a totally human, engrossing sentence or two. I hate being sucker-punched!