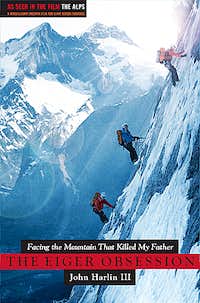 The author was nine years old in 1966 when his thirty-year old father lost his life in a 4,000 foot fall during an attempt on a direct ascent of the notorious Eiger. The son also became a climber and the call of the Eiger persisted for him in the face of assurances to his mother that he would not seek the type of cutting edge alpine career that killed her husband. But in 2005, Harlin succumbed to the lure of the Eiger and agreed to climb the face –albeit not the extreme North Face direct route his father took-when he got an offer from an IMAX filmmaking crew to capture an exciting climb and the beauty of the Alps. Along with two others, Harlin made a successful ascent captured in a film distributed as “The Alps: Giants of Nature.”

Exciting Title, Humdrum Contents
This book was a big disappointment. The author devotes a substantial portion of the book to a mini-biography of his father. Not that this does not seem like a good idea given the pioneering efforts in alpine climbing of his father’s short but illustrious climbing career. However, Harlin junior manages to create a tone which generates the impression that he does not deem himself worthy to even speak about his father’s climbing exploits. In other places, the expectation created by the title of the book is dulled by an excess of mundane detail about his father’s and his own background and upbringing.

His own ascent of the Eiger, as part of a filmmaking project, is without question a marvelous climbing achievement. However, his account is not forged in a manner to make it inspirational, which the account should be.

Personally, I was further troubled by the author’s brief reference to his activities as a 13-year old at the family’s country home in the state of Washington:

“The open landscape swarmed with rabbits just begging to be killed by my single-shot .22 rifle, and I fed them to my new dog, Ranger, and to the hawks and eagles flying overhead.”

Yes, he was just 13 and hunting was apparently part of his upbringing, but I stand by my assessment that the scenario is disturbing.

Disappointed also and confused!
I just finished reading this book and I was more impressed with the bulk of the book which was devoted to John's writing about his father's achievements and family life than I was with the all the disjointed rambling about himself. I kept waiting and waiting for some buildup and detailed description of "the big event" and poof, the book ended! Very little on his climbing the Eiger, and what was told, was anti-climatic. In addition, I felt I understood John the III far less than I did his father by reading this book.

John the III's childhood with its constant stream of well-known climbing legends passing through his home was fascinating but I would have preferred to hear more about how he ended up being offered all those publishing jobs and how he kept active in climbing at the same time; details were weak here.

Overall, a very inconsistent book that does not fulfill one's interest in Harlin II or III or even the Eiger.