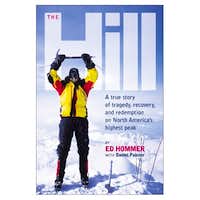 On December 15, 1981, then 27 year-old Alaskan bush pilot Ed Hommer was piloting a small charter plane with three passengers when it crashed on Denali (“The Hill”). There ensued a dramatic fight for survival including weathering a fierce winter storm. After four harrowing nights on the mountain, Hommer and one other passenger were rescued by a local climbing team. The other two passengers perished.

Left without his lower legs, this is the story of Hommer’s spiral into despair and subsequent determination to come back at nearly full throttle. He relearned walking, cycling and mountain climbing on prosthetics, moving towards his ambition of summiting the mountain that almost killed him. In 1999, on his second attempt, he summited Denali and secured his redemption.

Good Story, Middlin' Writing
This is quite a story of picking up the pieces and moving on with your life after something happens that causes you utter despair. Truth to tell, the book is not particularly well written, but the story maintains your interest. I enjoyed the first part of the book the most recounting the plane crash, the efforts at survival and the rescue by a local climbing team known as the Mountain Maniacs. Hommer had virtually given up on himself right before the rescue and his thought processes leading to resignation make interesting reading.

Hommer never lost his sense of humor; he touts the obvious advantage in climbing of not having feet as not having to worry about freezing them! Some of his friends thought he was nuts to want to climb Denali with artificial legs, but he persisted and it all went well on his second attempt, 18 years after the accident.