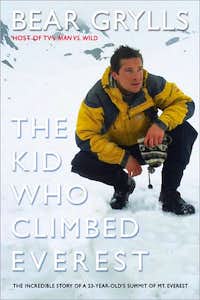 From the back cover of the book: "The incredible true story from the host of TV's Man vs. Wild. He was once a critically injured Special Forces soldier who endured eight months of grueling therapy from a broken back in 1996, when his parachute failed to open over the African desert. But Bear Grylls was determined to scale new heights-literally-in this riveting story of hope and true grit. He raised the money on his own, spent seventy days on the dangerous south face, and became the youngest Briton to scale Everest."

As Bear and several reviewers point out, his chances of achieving Everest's summit were less than those of the average climber due to his youth and lack of high altitude experience yet in 1998 he achieved his goal and for one year he held the record.

The vast majority of this book deals with Grylls' decision to join an expedition to Everest and the expedition itself. Excerpts from various participant trip diaries and vivid descriptions help the reader form a picture of Bear's fears, frustrations and success.

Earthy, semi-pleasant tale
Ignore any hype you may have read elsewhere about this book. Bear prepared to climb Everest by conditioning and raising money and he seemed to have a fairly typical successful experience getting to the summit, at least IMHO. What distinguished this book from many others in the Everest genre I have read was Grylls' details about daily life on the mountain e.g. layers of clothing, bathroom habits, and living in close quarters etc. You judge if it is too much detail or too down to earth.