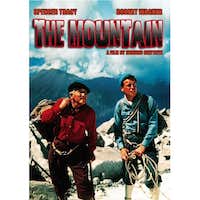 When a plane crashes on a mountaintop Chris wants to plunder the wreckage. His older brother Zachary has given up mountain guide work but goes along rather than letting his brother risk it alone. The only survivor is a Hindu girl who Chris wants to kill. Zachary fights him off. While Chris steals from the dead passengers, Zachary prepares a sled to take the girl down the mountain.

Fun
This is an older film that has a great build up. Entertaining and fun. Not on the top of my list but not bad for a climbing feacher film.