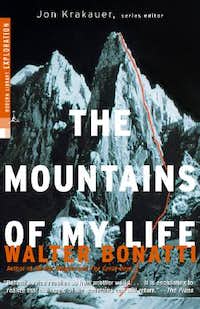 At the age of 23, Bonatti was selected as the youngest of an 11-member Italian team to attempt a 1954 assault of K2. Years earlier, as a teenager, he was already attacking the most dangerous walls of the Alps with the most primitive of equipment. By the end of his relatively brief 18-year mountaineering career, Bonatti had set standards for ascents in the Alps and the Himalaya that were audacious and at the extreme.

In this book, Bonatti recounts the highlights of his magnificent alpine career with special attention to the ascent of K2 in 1954. Great controversy erupted in the Italian mountaineering community about Bonatti’s role in this achievement. Bonatti was so vilified that he sued for libel over a decade later and was vindicated as to his version of the events on K2. The accounts of his other great climbs over the span of his career are also captivating reading. All in all, this is a great climbing biography.

Great Climbing Biography
Bonatti is one of the great names in mountaineering history and he was certainly at the cutting edge in his era with regard to the routes that he attacked. I especially enjoyed his account of his successful 1955 assault on the southwest pillar of the Dru, then regarded as unclimbable. It took him 5 days of relentless and monumental effort and his narrative is riveting. This was just one year after the K2 climb which generated so much controversy for the rest of his life. Ten years later, his solo midwinter climb straight up the icy north wall of the Matterhorn, in one fell swoop, left the European climbing community mesmerized.

You can’t go wrong with this volume, although some of the bitterness Bonatti developed arising out of the “K2 affair” seeps through in the writing.