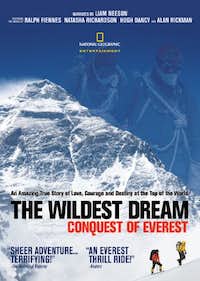 In 1999, renowned American mountaineer Conrad Anker made a discovery that reverberated around the globe. High in Mount Everest's "death zone," he found the body of George Mallory - 75 years after the British explorer mysteriously vanished during his attempt to become the first man to summit the world's tallest peak.

Mallory had risked everything as he set out, dressed in gabardine and hobnailed boots, in pursuit of his dream of reaching the top of Everest - which in 1924 was the last great adventure left to man. He was last spotted alive just 800 feet below the summit. Then the clouds rolled in and Mallory vanished into legend.

After discovering Mallory's body, Conrad Anker's life became intertwined with Mallory's story. Remarkably, Mallory's body was found with all his belongings intact. The only thing missing was a photograph of his wife, Ruth, which Mallory had promised to place on the summit. Haunted by Mallory's story, Conrad longed to return to Everest to lay Mallory's ghost to rest.

Entertaining
This is a neat film because it discusses the classic Mallory expedition made on Everest. The climbers reenact the climb and see if it would have been possible for Mallory to summit when he attempted the mountain in 1924