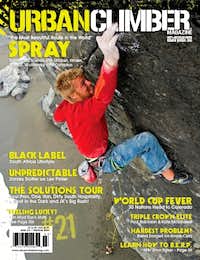 This is a relatively new magazine, and the first Urban Climber Magazine issue was launched in 2004. Geared towards the youth, this magazine focuses on hard sport and bouldering with minimal ice, alpine, and trad climbing.

Urban Climber also has developed UCTV, which was launched in early 2006 and is now one of the leading online sites for climbing films and video. Climbing magazine, the largest circulation climbing magazine, was acquired in late 2006.

good bouldering
although the content is mainly bouldering and sport, they do do an excellent job in covering it. UC magazine has fantastic photography.

a bit too much about the short stuff
I may be a youth, but this is too much about bouldering and sport climbing. It has nice photography and great info at times, but the scope of the climbing that is included in the magazine is minimal.