This describes the standard Owen-Spalding route with only one slight variation. This slight variation gives you a fun extra pitch of technical climbing which will help to justify hauling the rope up there. Then, if you combine it with the Wittich Crack (5.6) , you will have a great day of climbing a moderate multi-pitch alpine route in the Tetons. Enjoy this fantastic Grand Teton climb!

Here is a great link for up-to-date route conditions on the Owen-Spalding: www.TetonClimbing.blogspot.com.

From Lupine Meadow Trailhead (6732 ft) follow the trail up through Garnet Canyon. At 1.7 miles the trail forks. Stay right and continue for 1.5 miles where the trail forks again. Go left, following the signs to Garnet Canyon. After 1.1 miles, the Platforms (8960 ft) campsites are reached. Shortly after, the trail crosses a moraine field and reaches the Meadows (9200 ft) camping area after another 1.0 miles. At the Meadows, a small log bridge will greet you to the left. Stay right and follow the trail as it begins to switchback up toward Spalding Falls. Above the falls, the trail continues climbing until reaching the Lower and Upper Moraine campsites (11,300). Above the Upper Moraine campsites the Lower Saddle headwall will appear directly to the west. Use the fixed rope to ascend the class 3/4 headwall section. A short hike above the headwall will end at the Lower Saddle (11,600).

From the Lower Saddle, hike north toward the obvious black dike. The trail will split in a couple of places. Stay left and end up on the left (west) side of the dike. A tall feature called The Needle will greet you just past the dike. Engage in class 3 for short distance until reaching a slight headwall and a large chockstone chimney to the right. Climb slabby terrain for 100 ft to the right until reaching a ledge. The next obstacle is the Eye-of-the-Needle, which is a tunnel-like opening in the rock. Continue through the Eye, then traverse north along a ledge until reaching a large boulder which you must climb around with a little exposure.

Head up into the couloir and follow the climber's trail to the Upper Saddle. At the Upper Saddle, the Enclosure will be to the left, and the west face of the Grand will be on the right. At the Upper Saddle, the entire west face and the bottom of the OS route will come into view. Take a minute and note features and the route. Also, look behind you and remember which of the two couloirs were used in the ascent. You will want to use the center couloir for your descent. The westerly couloir is the Idaho Express and is easily mistaken for the descent route.

From the Upper Saddle, the object is to traverse north across the bottom of the west face before ascending up to the summit block. The standard OS does the complete traverse, but there are several cracks along the way for variations of the route including the Collins-Hume (5.11) and the Wittich Crack (5.6). Climbers generally rope up before beginning the traverse. Begin the traverse with the Belly Roll pitch. This is an easy section, but you will want to be roped due to the exposure. Afterward, the Crawl Pitch is done by doing a hand traverse over fantastic exposure. The Crawl Pitch shortly ends with the Double Chimney where the upward ascent to the summit block continues. This chimney (5.5) climbs about 20 feet to a large ledge. From the ledge, look directly up and right into the obvious Owen Chimney. From here and to the extreme right (south) the OS Original Route continues along The Catwalk slabs.

The Owen Chimney (5.5) usually contains some degree of ice. Warmer years may yield less, but the right-hand side of the chimney is almost always in shade and is icy. Good pro can be found in the Owen Chimney which is approximately 80 ft. Exit the chimney on a good belay ledge with great anchor points. After exit, look for the large chimney system to the left (east). This is the Sargent's Chimney and is about 80 ft. Also, look to the right and locate the rappel station for your eventual rappel to the upper saddle. Continue up the Sargents Chimney and look for rap slings at the top. After the chimney, go left (north) and traverse along a narrow ledge and slab. At the end of slab, go right (south) until reaching the obvious class 3 blocky terrain to the summit.

Descent: From the summit, descend the blocky terrain. Go right (north) until intercepting the slabs, then go south along the slab until reaching the top of Sargent's Chimney and the rap station. Rap to near the top of the Owen Chimney. Go left (south) and look for the slings and rap station which will get you back to the Upper Saddle.

The rappel to the Upper Saddle is 120 ft. Most use two ropes; however, a tricky rappel with a single 60 meter dynamic rope is possible if done correctly. First, tie knots on the ends your rappel rope. Next, throw your rope to the rappeler's right (south) of the rappel station (or....to your left when facing out over the cliff). The bottom of the rappel has a significant down-slope to the north, so if you throw your rope to the south, a 60 meter rope will reach the bottom with rope stretch. Stay to the south during your rappel.
Update: A new rappel station was installed 50M North of the standard rappel station in Aug '04. This will surely alleviate congestion at the standard station, but definitely requires 2 ropes. (Courtesy of tetontom)

At the Upper Saddle, head for the descent couloir taking care not to use the westerly Idaho Express couloir by mistake. A faint climbers trail and occasional cairns will help guide the way. Retrace your route to the Lower Saddle.

The lower section of the Owen-Spalding.

120 ft. rappel to the Upper Saddle. Note how the bottom slopes from left to right.

1. A camp during the approach will improve your chances of success. The Meadows is a great camping area, but is usually crowded and permits are sometimes difficult to get. Also, it's a 4500 ft. climb to the summit from the Meadows. A better camp is either the Upper/Lower Moraine or the Lower Saddle. The Moraine is the best of all because you are high on the mountain and the sites are sheltered. The Lower Saddle campsites get you direct access to the beginning of the route, but the sites are exposed to the weather and the notorious wind from Idaho.

2. The Eye-of-The Needle is tricky to find even in daylight. You cannot see the Eye from the climbers trail. If using a high camp at the Moraine or Lower Saddle, it's best to scout the Eye the afternoon before your ascent so you can do this section in the dark early the next morning. The Eye is about an hour round trip from the Lower Saddle.

3. Start early no matter where you begin the climb. You need to be off the mountain by noon or early afternoon to avoid storms. Guide services begin at 4:30 am from the Lower Saddle. Very fit parties climbing fast and light can do the route from the trailhead. Its a 7 mile, 7000 ft climb from the trailhead to the summit, so plan your start accordingly.

4. Most guide services do not mind if you follow them up the mountain as long as you maintain your distance and don't get in the way. Beware of congestion, though, on the technical sections and the rappels.

5. If camping, get your backcountry camping permits early by using the reservation system as described on the main page. If you don't have a reservation, you need to be at the ranger station before it opens at 8:00 am two days before your climb.

The entire route is in an alpine environment and violent afternoon storms are common. Snow and hail can occur any time of the year. Bring outerwear with this in mind.

Also, if camping on the Lower Saddle, bring a very sturdy tent. The fierce westerly wind on the saddle is notorious. 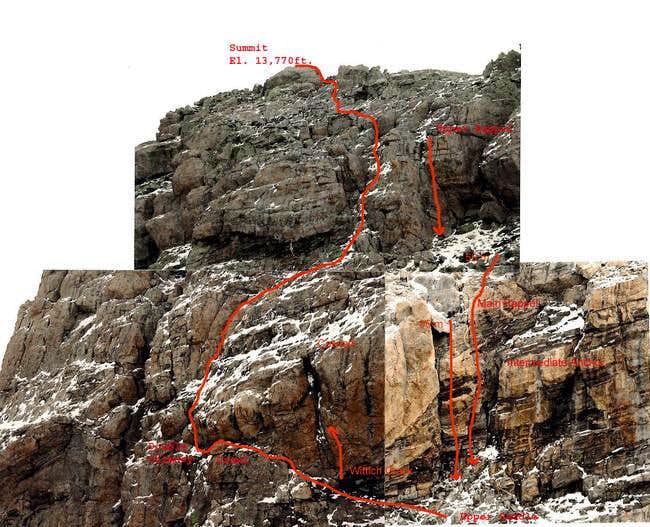 Photo from Early summer 2004. There are actually 3 people at lower (35 m) rappel station to give scale.
Photo by mtnclimber101
Click To Enlarge