Owl Canyon is part of the Rainbow Basin Natural Natural Landmark managed by the Bureau of Land Management. It is about just a few miles north of Barstow, CA and most people don't know it's there. However, as I found out yesterday, it is a fantastic place to explore! There are several slot canyons, caves, and amazing rock formations. As the name suggests the rocks are very colorful ranging from pinks and tans to greens and purples. All the different rock layers are all bent up at an angle and some are fantastically twisted and deformed. Intersecting the rock layers at right angles are slot canyons, only one of which is named, Owl Canyon. This area reminds me a bit of the San Rafael Reef in Utah but on a smaller scale. There are fossils out here as well so the amateur paleontologist would have a great time looking for evidence of life from the Miocene Epoch more than 5 million years ago. Mastodons, camels, and flamingos used to roam around out here...

Current plantlife out here is sparse - creosote and yucca, a few wildflowers in the spring, and that's about it. Wildlife includes ravens, desert tortoises, jack rabbits, and coyotes. I assume there are owls, too, but I haven't read about any specific species for which the canyon was named. 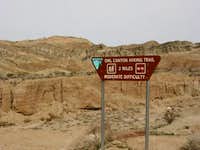 From the Owl Canyon Campground you can hike north up through Owl Canyon. There's not really a trail but the way is pretty self-explanatory. Part of the way up on the right is a cave that you can walk through. There are some parts of the canyon that are Class 3 but most of it is walkable. Once the canyon opens up into a broad valley you can go west and climb to the top of the mesa for amazing views stretching all the way south to the San Bernardino and San Gabriel Mountains. From the mesa there is a way to go south down another slot canyon involving some more Class 3 scrambling and then up and over another mesa making about an 8 mile loop. Along the way there are other slot canyons, some with caves, that you can explore. Here is a map of this route. 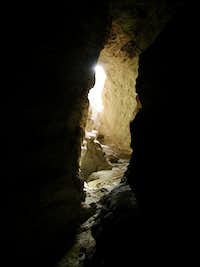 This is a fragile desert area so please practice Leave No Trace ethics.

Do not collect fossils. Do not disturb the endangered California desert tortoise should you be lucky enough to see one.

Never hike in Owl Canyon or the nearby slots if there is a chance for rain as there is a high risk for flash-flooding.

Watch out for rattlesnakes and be prepared for weather extremes. Sunscreen, hat, and plenty of water are musts in this desert environment. Bring a headlamp if you want to explore the caves. 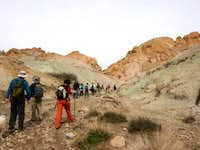 Owl Canyon Campground is $6/night. There are pit toilets, fire rings, picnic tables, shade ramadas, a couple of playgrounds for kids, and water spigots (water isn't always available, though, so be sure to bring some). 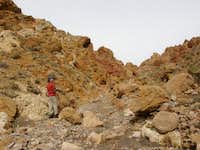 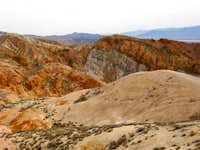 Underneath Rainbow Basin is the massive batholith that lies below much of the western Mojave (Dibblee 1968:15). Made from a type of rock called quartz monzonite, this batholith dates to either the Cretaceous, or possibly the late Jurassic period (Dibblee 1967:43). Early in the Cenozoic Era this batholith was exposed in the area surrounding Rainbow Basin and bent downward as it underwent compression, to form a basin (Bureau of Land Management 1992:30). Sediments deposited in this basin became the sedimentary rocks that are most visible in Rainbow Basin today (Dibblee 1968:56-57). Further compression, uplift, and finally extension left these sedimentary formations deeply folded, the most prominent fold being the Barstow Syncline. These same stresses also produced several faults in the Rainbow Basin area (Bureau of Land Management 1992:30).

Leaving Rainbow Basin. The white layer along the skyline is marker tuff.The thick sedimentary layers can be divided into three distinct formations. The lowest is called the Jackhammer Formation, and it is composed of layers of sandstone, siltstone, limestone, and conglomerate, all probably dating to the early to middle Tertiary period (Dibblee 1968:18).

Above this is the Pickhandle Formation. The sediments making up this formation are mostly of volcanic origin – tuff, rhyolite and andesite (Dibblee 1967:84), indicating that they were laid down during a period of active volcanism. That time was probably during the early Miocene (Dibblee 1968:23).

The highest of the three formations is the Barstow Formation, which is made up of layers of conglomerate, limestone, sandstone, and shale (Dibblee 1967:86). This formation dates to the middle to late Miocene (Lindsay 1972:15) and it contains one of the largest Cenozoic fossil assemblages in North America (Dibblee 1968:32). Most of the sediment that makes up the layers in this formation was stream-laid (Dibblee 1968:28), but there is a white layer of rhyolitic tuff (sometimes called marker tuff) near the top (Dibblee 1967:86). 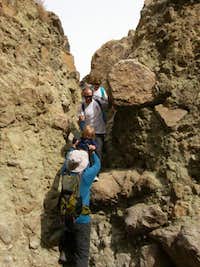 Finally, on top of everything else, is a relatively thin layer of fanglomerate (alluvial fan deposits) laid down during the late Pleistocene (Bureau of Land Management 1992:31). Differential erosion of rocks of different hardness finished the job of sculpting the formations into the fantastic shapes that can be seen in Rainbow Basin today (Dibblee 1968:52).

The majority of the fossil beds in Rainbow Basin are found within the sedimentary rocks of the Barstow Formation. They include many animals not found in California today, including camels, horses, mastodons, and flamingos (Lindsay 1972:15), (Bureau of Land Management 1992:33). This unique collection of animals is representative of the Barstovian Land Mammal age. In 1941 Rainbow Basin was designated the type reference for the Barstovian Land Mammal age by the North American Paleontological Society (Bureau of Land Management 1992:33).