Oza Butte, Paiute for a 'narrow neck basket', is a striking butte sitting across  from the Grand Canyon Lodge on the North Rim directly across The Transept, a deep canyon that feeds the Bright Angel Drainage far below. During the summer, hundreds of visitors stare across the Transept at Oza, drinking their morning coffee or enjoying a sunset beer. For those looking to venture even further off the beaten path on the North Rim, Oza Butte is an off-trail adventure that lets you wave back across the Transept at those smug coffee sippers as they try to figure out how the hell you got on top of that sandstone beauty.

From the town of Jacob Lake, drive south on Route 67 through the North Entrance Station of Grand Canyon National Park. About 3 miles before reaching the lodge and visitor center is the signed turn off for the Widforss Trail and Point Sublime Road. Drive about 1/2 mile to the Widforss Trail parking area and park. 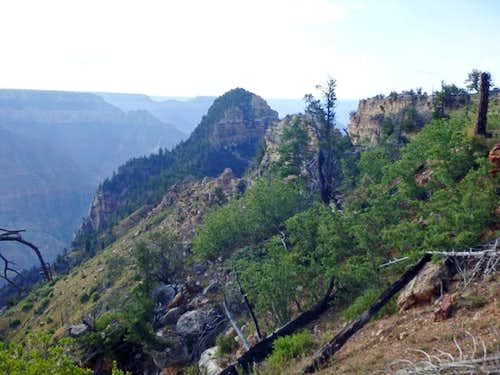 Oza on the approach
Start out on the Widforss Point Trail as it takes a meandering course towards the North Rim. Oza Butte should be immediately in sight once reaching the rim. Continue along the trail as it weaves in and out of shallow drainages, occasionally pulling off into the forest. A little over 2 miles in, the trail enters a deeper drainage with some small stands of Aspens. Stay on the trail just a bit longer as it climbs out of the drainage leaving the aspen behind you, cutting to the west. Just as the trail is about to level off, cut off towards the south, angling slightly back to the east to rejoin the rim. Oza will likely be out of view at this time, so a GPS may be helpful, although when in doubt, follow the rim. You'll have to ascend and descend about 3 consecutive false summits before reaching the North Rim at a sandstone promontory that juts out along the connecting ridgeline between Oza Butte and the Rim. 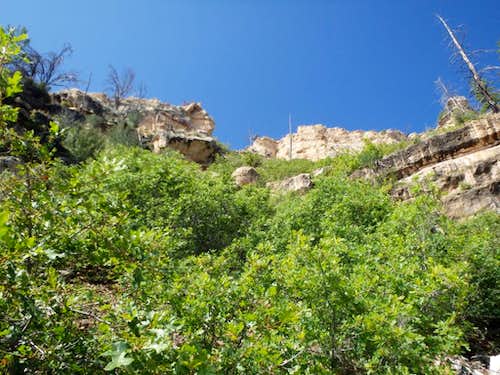 Looking up the brushy class 3
Here's where things start to get messy. Drop off the sandstone to the east, using various weaknesses in the ledges ranging from 3-10'. You'll likely be using one of the many small oak trees over running the slopes to aid in a controlled descent. Given the brush, a detailed description of the descent route is difficult, however I found the best line was descending down the first sandstone bay about 1/4 of the way off the rim, then traversing south into the next bay, finding a key class 3 crack down a 10' face to the steeper talus below. Once on the more stable footing of one of many ill defined game trails, hike south in and out of several drainages to reach the base of Oza. A game trail that runs the spine of the connecting ridgeline between the fins of sandstone is probably the easiest option, although you'll have to climb up to the saddle once you clear the rock coming off the north rim.
From the base of Oza, head up the prominent conifer strewn gully several hundred feet to the summit, utilizing various class 2 and 3 weakness to move up the scattered rock bands. Compared to the descent off the rim, this section is much more free of brush and scrambling pleasant. The summit register is tucked next to the highest rock, with some debris near the top from an old geologic station.

Admission to GCNP is $30 for 7 days. I highly recommend the "America the Beautiful" Pass for $80, which covers the entrance fees for all federally managed parks and land for one year.
No additional permits are needed unless you're planning on camping off Point Sublime Road. Camping is allowed at any of the pull-offs along the way provided you have the proper NPS permit.

Oza is likely only realistically climbed when the North Rim is open, typically May 15 - October 31 weather permitting. Winter is possible, but would require a pretty epic ski tour from Jacob Lake or climb up from the river. Despite the elevation, the North Rim can still be painfully hot in the summer, and summer monsoons are common.

There is plenty of places for camping at large along Point Sublime Road provided you pick up an NPS permit, which is currently $6/ permit and $10/night. In the National Forest just outside the park there is plenty of additional at large camping, no permit required. The Demotte Campground is located near the Kaibab Lodge just near the turnoff onto FR 611. There is also several developed campgrounds in Jacob Lake, as well as the North Rim campground within the park. 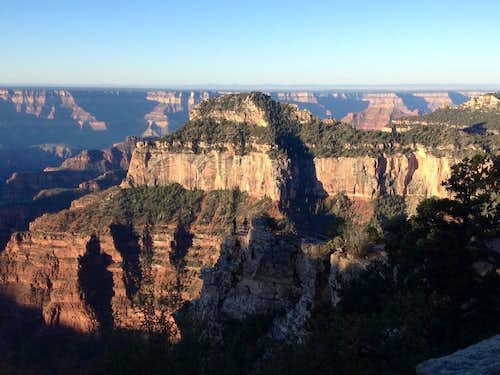